It may feel as if the Thunder have been mired in the rebuilding process forever, but it was less than two years ago that the Chris Paul-led version of the team was competing in the bubble playoffs as a No. 5 seed. Since then, of course, Oklahoma City hasn’t come close to sniffing the postseason and has shown little inclination to try, shutting down a series of players due to injuries after the All-Star break in both 2021 and 2022.

Still, the Thunder haven’t been the NBA’s worst team in the last two years, and they’ve uncovered some potential gems during that stretch. Last year’s No. 6 overall pick, Josh Giddey, looks like the closest thing to a home run so far, but OKC has some other promising young players under contract and has done well to get value out of a player like Kenrich Williams, a throw-in in the Steven Adams sign-and-trade two offseason ago.

Given how many draft picks the Thunder have stockpiled and how few games they’ve won since leaving the 2020 bubble, there will be some fans anxious to see them start pushing their chips into the middle of the table this summer. But Sam Presti, who has no concerns about his job security, won’t be rushed, and appears satisfied to spend at least one more year in the lottery, focused on player development, before he begins to put his foot a little further down on the gas pedal. 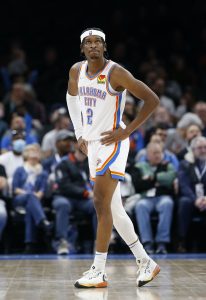 The Thunder will be a team worth watching close before and during the draft, since they still have a ton of unused cap room for the 2021/22 league year. That cap space will essentially disappear at the start of July when the new league year begins and Shai Gilgeous-Alexander‘s maximum-salary extension hits the team’s books, but it’ll be available in June and could be useful to accommodate a salary-dump trade.

Of course, the fact that the Thunder are once again loaded with valuable draft picks will also make them one of the most intriguing teams of the first half of the offseason. Oklahoma City controls four of the top 34 picks of 2022 and will have two lottery selections.

The Thunder didn’t have great lottery luck a year ago, slipping from fourth in the lottery standings to sixth in the draft itself. But with their own pick and the Clippers’ pick in this year’s lottery, their odds of landing the No. 1 overall pick are as good as anyone’s, and they’ll have a better chance than any other team of ending up in the top four. That bodes well, considering some draft experts believe there’s a drop-off after the consensus top four prospects (Chet Holmgren, Jabari Smith, Paolo Banchero, and Jaden Ivey).

All 15 of the Thunder players who finished the season on standard deals remain under contract for next season, so the front office won’t technically have any free agent decisions to make. But the team will still have to make several keep-or-cut calls on players who have team options or non-guaranteed salaries. Some of those decisions will be simple – Williams and Luguentz Dort, both earning $2MM or less, obviously won’t be cut – but I certainly wouldn’t expect everyone to be back.

Presti could also be active on the trade market, if only to help make room for the incoming rookies. Derrick Favors is the most obvious trade candidate on the roster, but it wouldn’t be a surprise to see some young players shopped if they’re not considered long-term cornerstones. Darius Bazley and Ty Jerome, for instance, are both entering contract years and could be trade candidates if OKC doesn’t want to lock them up with extensions.

Among the Thunder’s extension-eligible players, Dort and Williams are the best candidates to receive new deals. The team would be able to offer either player a four-year extension worth up to approximately $60MM.

If the Thunder are concerned about their ability to extend Dort, they do have the option of turning down his team option for 2022/23 in order to make him a restricted free agent. That would make him more expensive in the short term, but would eliminate the possibility of him getting away in unrestricted free agency in 2023. In that scenario, Oklahoma City would also be able to go beyond the four-year, $60MM-ish limit that would apply to an extension.

Note: These are players who are either already eligible for an extension or will become eligible before the 2022/23 season begins.

The Thunder only currently have about $84MM in guaranteed money on their books for next season, but after accounting for the options most likely to be picked up and the cap holds for three first-round picks, that number jumps to about $115MM. That means the Thunder will almost certainly operate as an over-the-cap team once free agency opens.

It’s possible Oklahoma City will shed some salary in trades and try to gain some cap room, but there would need to be a specific purpose for that cap space. The Thunder showed in 2021/22 when they were only carrying $78MM in guaranteed money and still operated “over” the cap for much of the season that they won’t renounce exceptions and cap holds and go under the cap just for the sake of it.

Salary and cap information from Basketball Insiders and RealGM was used in the creation of this post.