‘Beyond the moments of protest’: How the NBA-backed Social Justice Coalition is sustaining the movement - bdsthanhhoavn.com Skip to content

The “Black Lives Matter” decals are gone from the court. There are no social justice messages on the backs of jerseys and no one is kneeling during the playing of the national anthem.

Today, the NBA’s activism is conducted in part out of a home office inside a brick, two-story home in Washington, D.C. Built in 1925, the front porch has four columns and a chandelier hanging from the ceiling, all of it underneath an open-air, second-story balcony. The home covers 4,200 square feet and is worth more than $1.4 million. There are four beds and four baths.

Inside the office, James Cadogan, 40, has a framed photo of him and former President Barack Obama, for whom he first worked as a campaign aide in 2008, and another photo of him with then-Attorney General Loretta Lynch, whom he served as senior counsel when she headed the U.S. Department of Justice. Also on the wall is Cadogan’s Michael Jordan shooting shirt from 1992.

Born to Caribbean parents in the United Kingdom, Cadogan moved to the United States in 1996 and played high school basketball in Maryland. He attended Princeton and Columbia Law School. He was the first director of The Thurgood Marshall Institute at the NAACP Legal Defense and Educational Fund.

In 2020, while the NBA and its players undertook unprecedented actions in the name of social justice, Cadogan was overseeing a $90 million grant portfolio for criminal justice reforms at Arnold Ventures.

Cadogan’s new job is to take what happened inside the NBA’s bubble at Walt Disney World, the court stickers, the jersey protests, the kneelings during the playing of the national anthem and the players daily demanding justice for African-Americans, and make it “sustainable.”

“I think there are lots of great athletes across sports, who stood up for the things that they believed in, which is so very important and is the backbone of this work,” Cadogan told The Athletic. “We’re standing on the shoulders of 75 years’ worth of players and coaches and others in the NBA, dating back to Bill Russell and Kareem (Abdul-Jabbar) and Oscar (Robertson) and all the legends of days gone by.

“We’re now trying to institutionalize that work and honor that legacy in a way that moves us forward.”

Cadogan is the first executive director of the National Basketball Social Justice Coalition. 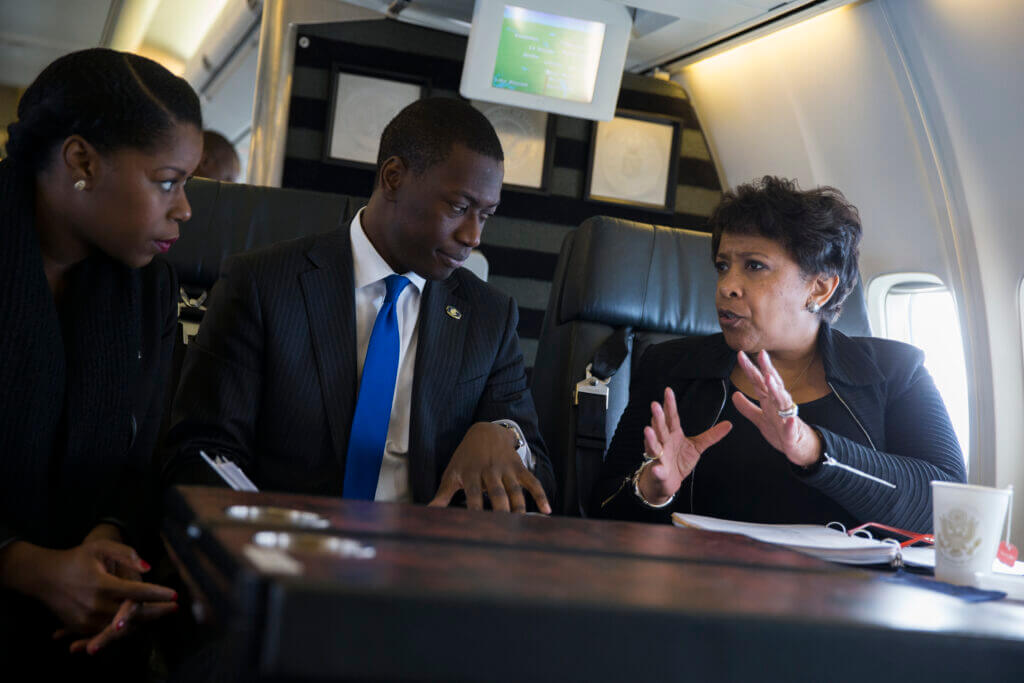 Remember in the NBA bubble when the Milwaukee Bucks refused to come out of the locker room in a playoff game against the Orlando Magic. The entire playoffs temporarily shut down due to it, and as part of the negotiation between the players and the league, the players asked for a coalition — a league-funded dedication to the social-justice issues important to the players. It was Obama’s idea. He counseled National Basketball Players Association (NBPA) President Chris Paul and LeBron James as they and other players were deliberating whether to resume play or head home from Florida.

The NBA and NBPA fund the coalition. There are players, coaches, team owners and league officials (like Adam Silver) on its board. They, with Cadogan’s advice, set the agenda. Cadogan carries it out, and he has a team of four professionals with similar backgrounds to his, who will be announced soon. Cadogan also is working with Brandon Gassaway, a public relations official with the NBA whose last job was as spokesman for the Democratic National Committee during the 2020 election.

Cadogan and his staff are basically lobbyists and will likely register as such very soon. He sends emails and hosts Zoom calls out of his D.C. home; he zips up to New York for meetings with league officials; he works the halls of the Capitol and the West Wing.

In March, Cadogan was joined by Dwane Casey, Pistons coach and coalition board member, to lobby the White House in support of criminal sentencing legislation.

“The tools of 2020 are not the tools of 2022,” Cadogan said. “The reason that we established a coalition is to take on this work on behalf of the NBA community, so it will look different over time. And it should look different over time. What we saw in the bubble, which I think will go down as a critical, pivotal moment, in not just sports history, but American history … there was a need and a moment and the right opportunity for players to stand up in a new way.

“Now, the outgrowth, the real question, I think this is true of anybody who cares about this work is, how do you do it sustainably? And how do you keep it going beyond the moments of protest?”

In the past year, the most Cadogan and the NBA’s coalition have to show for their work is the likely passage of the EQUAL Act of 2021 — a sentencing bill that was approved by the U.S. House and appears to have enough support in the Senate to reach President Biden’s desk. It would reduce prison sentencing for crack cocaine to match sentencing for powder cocaine.

Three other bills — the George Floyd Justice in Policing Act of 2021, a policing reform bill and voting rights legislation like the John R. Lewis Voting Rights Advancement Act of 2021 and Freedom to Vote Act of 2021 — have all failed to pass in Congress.

In the meantime, last year’s laws that voting rights experts say limit access to the polls have passed in Texas, Florida, Georgia and Arizona, where seven of the NBA’s 30 teams play. There were 19 such laws passed in states across the country in 2021, according to the Brennan Center for Justice.

In each of those states, conservatives control both houses and the governor’s offices. A call or an email from Cadogan, or even from, say Heat owner Micky Arison, who is on the coalition board, wasn’t going to change those bills. Last month, the Heat’s official Twitter account shared a video urging minorities in the state to familiarize themselves with Florida’s new voting laws, which the video called “even more confusing” than in the past.

For now, coordinating tweets like that is one of the primary ways the coalition can do work in the states. It will take years, and money, to expand its influence.