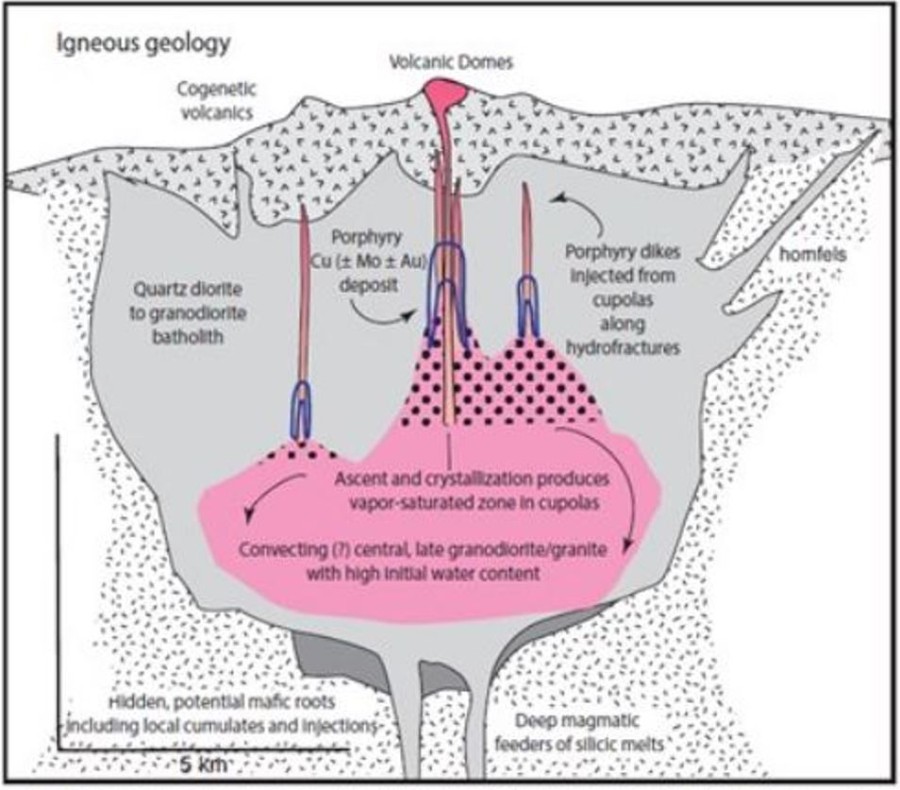 Elmer B. Stewart, President, and CEO of Copper Fox, stated, “The compilation and magnetic modelling has outlined an interpreted positive magnetic feature similar to the generally accepted model for formation of porphyry copper deposits (Image#1). The compilation shows the positive relationship of the copper-molybdenum mineralization, potassic/phyllic alteration and chargeability signature to several interpreted late stage intrusives. The compilation indicates that additional deep penetrating geophysical surveying is required to better define the geometry of the chargeability/resistivity signature associated with the porphyry system prior to selecting future drill targets.”

Image #1 shows the relation between the parental pluton and the formation of late-stage porphyry copper stocks/deposits. The Laramide age intrusive (69.7 +/- 0.4 Ma; U/Pb zircon) at Mineral Mountain consists of mineralized and non-mineralized granodiorite phases and a mineralized quartz monzonite phase intruding Precambrian rocks. The 3D magnetic modelling indicates a much larger intrusive body with several later-stage, pipe-like intrusives bodies exhibiting a strong spatial correlation to the copper-molybdenum mineralization and potassic and phyllic alteration. The modelling also located several previously unknown regional scale faults and aided in defining the contact between the Laramide intrusive and the Precambrian rocks to the east.

3D magnetic modelling of the 2022 airborne magnetic data has outlined a positive magnetic feature interpreted to be the upper portion (cupola) of a larger, deep seated intrusive. The modelling shows a number of pipe-like, magnetic bodies ranging in size from approximately 200m x 500m to 750m x 1,800m within the Laramide age intrusive above the interpreted cupola; several of which are associated with a large area of copper-molybdenum mineralization, a positive chargeability signature and potassic/phyllic alteration typically of a porphyry copper system. The Laramide age intrusive generally exhibits a low magnetic susceptibility. 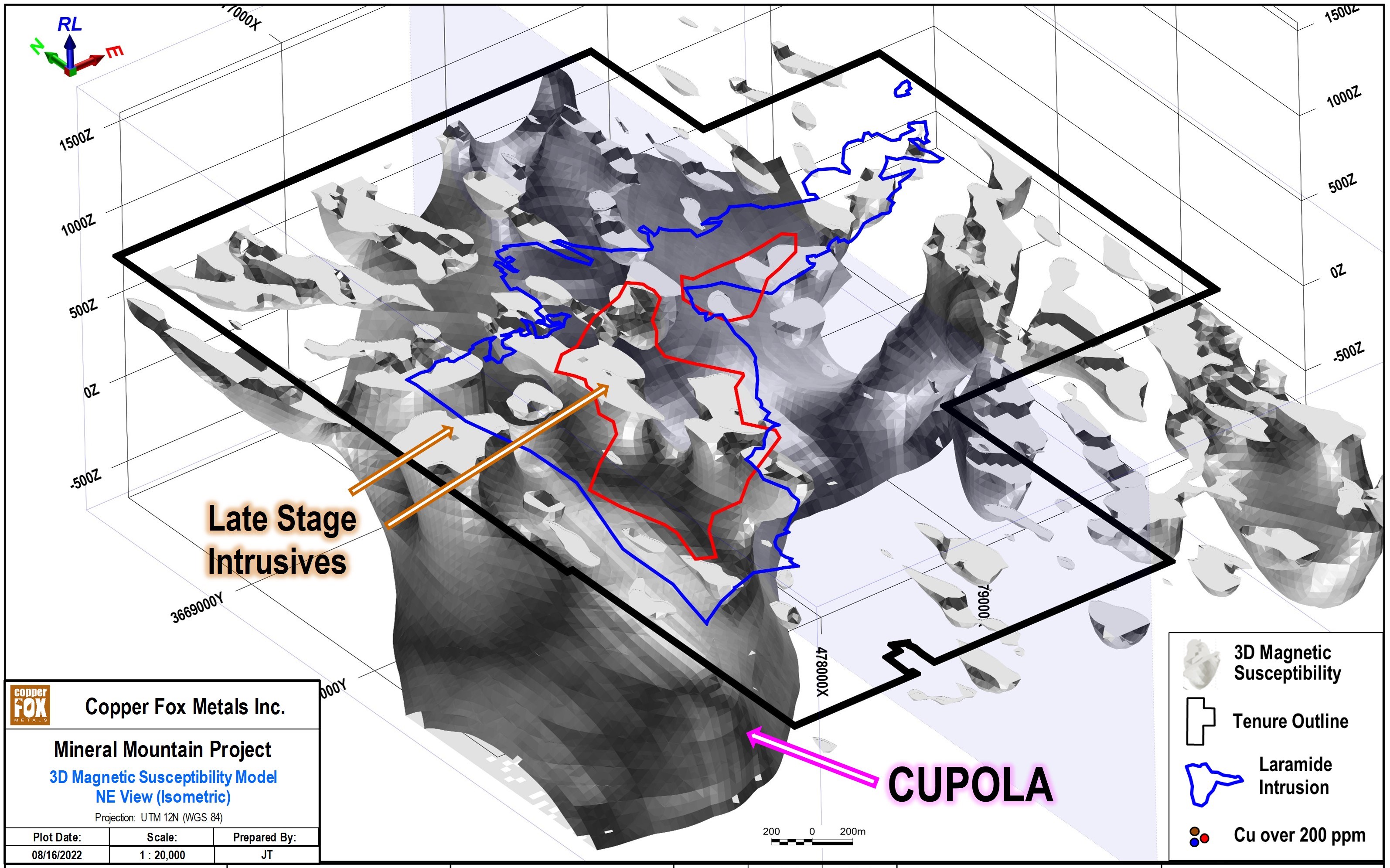 Image 23: Tilted view, showing 3D susceptibility (SI=0.086) model and spatial correlation of cupola, late stage intrusives with copper-molybdenum mineralization. Cupola on west side of project is not mineralized, note location of cupola within Precambrian rocks on east side of the project.

Elmer B. Stewart, MSc. P. Geol., President, and CEO of Copper Fox, is the Company’s non-independent, nominated Qualified Person pursuant to National Instrument 43-101, Standards for Disclosure for Mineral Projects, and has reviewed and approves the scientific and technical information disclosed in this news release.

Copper Fox is a Tier 1 Canadian resource company listed on the TSX Venture Exchange (TSXV: CUU) focused on copper exploration and development in Canada and the United States. The principal assets of Copper Fox and its wholly owned Canadian and United States subsidiaries, being Northern Fox Copper Inc. and Desert Fox Copper Inc., are the 25% interest in the Schaft Creek Joint Venture with Teck Resources Limited on the Schaft Creek copper-gold-molybdenum-silver project located in northwestern British Columbia and the 100% ownership of the Van Dyke oxide copper project located in Miami, Arizona. For more information on Copper Fox’s other mineral properties and investments visit the Company’s website at copperfoxmetals.com.

On behalf of the Board of Directors

In connection with the forward-looking information contained in this news release, Copper Fox and its subsidiaries have made numerous assumptions regarding, among other things: the geological advice that Copper Fox has received is reliable and is based upon practices and methodologies which are consistent with industry standards; and the reliability of historical reports. While Copper Fox considers these assumptions to be reasonable, these assumptions are inherently subject to significant uncertainties and contingencies.

Additionally, there are known and unknown risk factors which could cause Copper Fox’s actual results, performance, or achievements to be materially different from any future results, performance or achievements expressed or implied by the forward-looking information contained herein. Known risk factors include, among others: the interpretation of the 3D magnetic modelling may not be accurate or as interpreted; ; the interpretation of Target# 2 may not be accurate; ; further exploration of the property may not be completed as recommended or at all; the dimensions and shape of the mineralized areas may not be as estimated; the surface mineralization may not represent buried porphyry style mineralization; uncertainties relating to interpretation of the outcrop sampling results; continuity and concentration of the mineralization; the financial markets and the overall economy may deteriorate; the need to obtain additional financing and uncertainty as to timely availability of permits and other governmental approvals.