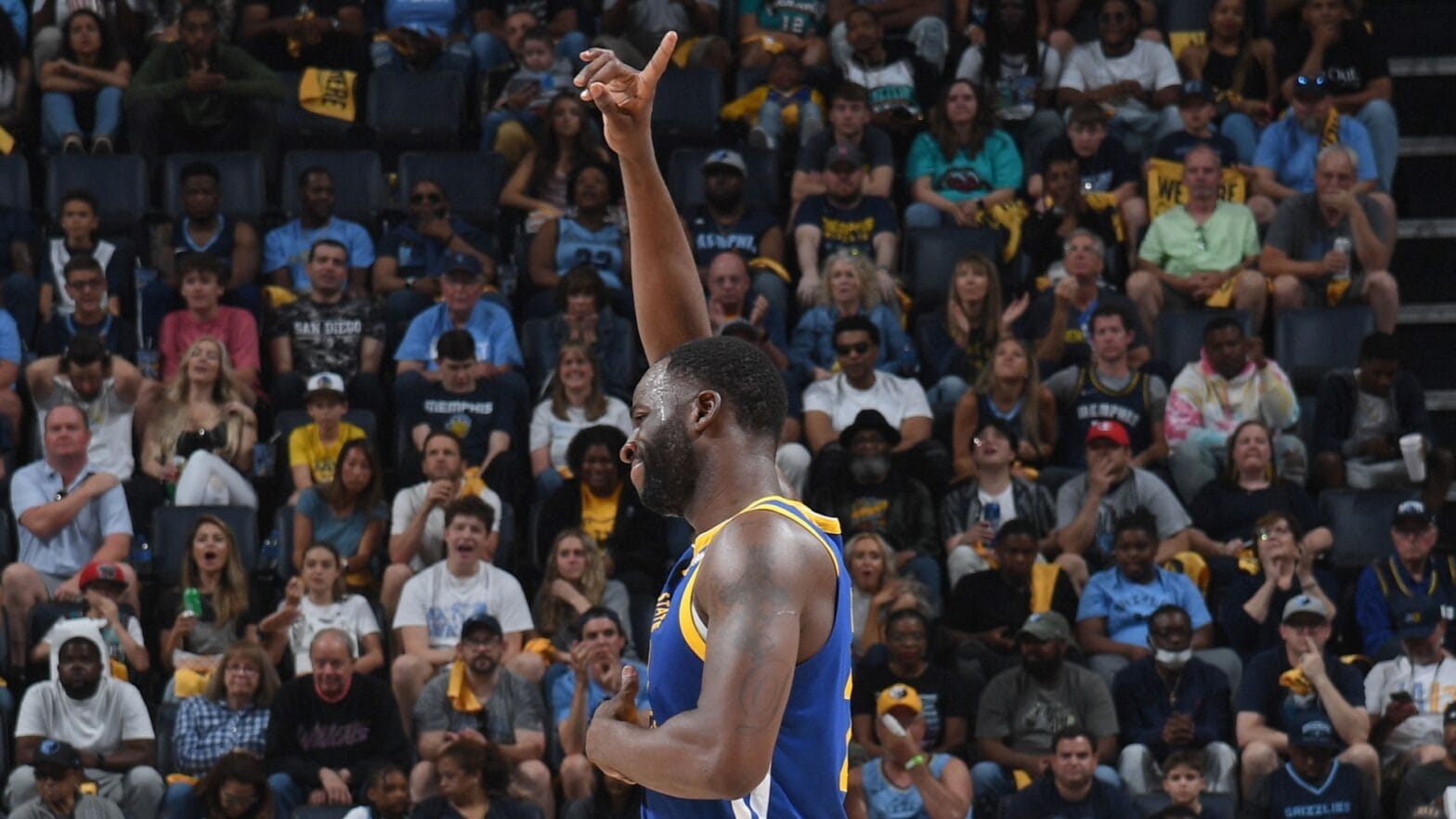 Draymond Green was ejected in Game 1 for the 17th time in his career, and 1st in the playoffs.

MEMPHIS – Draymond Green whacked his media session upside its head and grabbed it by the jersey Monday afternoon at FedEx Forum.

Which is to say, he was as consistent, as brash and as unflinching in talking about his truncated appearance in Game 1 against the Grizzlies Sunday as he is in playing that and every other Golden State game, including however many remain in this Western Conference semifinal series.

Green, ejected with 1:18 left in the second quarter after being assessed a Flagrant 2 foul on Memphis’ Brandon Clarke, didn’t apologize. He didn’t bemoan the NBA’s decision not to rescind or downgrade the violation.

The Warriors center swatted away suggestions that his reputation for such aggressive/unnecessary plays might have contributed to his ouster Sunday. And he was happy to remind all who would listen that, in spite of his unplanned absence from the second half and a half dozen other things that didn’t go right for Golden State in the opener, the end result was precisely what they sought.

“We won the game,” Green said.

Golden State’s Draymond Green debates his Game 1 ejection with the Inside crew.

That hasn’t always been easy. The 6-foot-6 “middle linebacker” of Golden State’s defense missed two months with a back injury, lingering into March. The No. 3-seeded Warriors went 34-12 when Green played this season, 19-17 when he didn’t. When he played 26 minutes or more, his team went 26-8 vs. 27-21 the rest of the time.

So having him on the floor in the series opener for just 17 minutes – however productive he was with six points, four rebounds, three assists and three steals – shifted the onus of winning to others. Such as Jordan Poole, whose near-triple-double and 31 points picked up not only Green but misfiring shooters Steph Curry and Klay Thompson (combined 14-of-39). And Kevon Looney, a more conventional center pressed into emergency action, and even 19-year-old rookie Jonathan Kuminga.

Poole, Looney, Kuminga, Otto Porter Jr. and Andrew Wiggins picked up serious slack on the boards by combining for 35 rebounds. That helped the Warriors win a stats category, 50-47, that had been a weakness in previous meetings with the Grizzlies.

“That’s what it takes when you lose a guy,” Green said. “Everybody stepped up and we accomplished what we went in there to accomplish.”

The Warriors’ latest additions to their fabled ‘death’ lineup are fitting in seamlessly.

Might they have to do it again before the series or Golden State’s postseason run ends? That was the backdrop that put Green’s flagrant foul in context: the NBA’s points system in the playoffs that assigns one point for a Flagrant 1 and two for a Flagrant 2. When a player hits four, he earns an automatic one-game suspension.

It’s the system that famously sidelined Green from Game 5 of the 2016 Finals. Cleveland pounced on his forced absence to win that, sparking the Cavaliers’ comeback from a 3-1 deficit in the series.

It stuck in coach Steve Kerr’s craw then and it’s back there now that the cumulative system isn’t fair to teams that advance.

“I’m always amazed … that a guy who loses in the first round is subject to the exact same flagrant foul points as the guy who goes to The Finals,” the Warriors coach said. “One guy plays 25 games, one guy plays four, and it’s the exact same rule. I’m not quite sure how or why that is the case. Regardless, it is what it is.”

Said Curry: “Only he can tell you what that means to him and the way he approaches the game. I just want him to be himself. Make the plays he knows he’s capable of making. Impact the game. Be physical. Be demonstrative. Be the Draymond we expect. But hopefully not get in a situation where interpretation of the rules or how somebody might see it goes against him.”

Clarke, the Memphis forward who took the hit to the face and jersey tug to the floor, had no doubt about Green’s recklessness after viewing replays of the foul. “He’s been known for flagrant fouls in his career. I’ve watched them on TV my whole life, it feels like,” said Clarke, 25. “He’s a really good player on defense, there’s no need to do the extra stuff.”

Not to worry, Green said.

“My reputation is a badge of honor,” he said. “Not everybody can earn that reputation. So, life goes on. I’m never going to change the way I play basketball. It’s gotten me this far: Three championships, four All-Stars, Defensive Player of the Year. Not gonna change that.”

Green took a swipe at the system, which the NBA reportedly considered revising in the aftermath of 2016 but never did.

Fine. But in the here and now, might Green’s flirtation with a looming suspension take some bite out of how he plays, leaving mostly bark?

“Absolutely not,” he said. “If I take the bite out of the way I play, then we probably go home early and the points don’t matter anyway.

“Take bite out, that don’t really work for me.”

Golden State forces Ja Morant to take 31 shots to score 34 points, including a pair of crucial misses in the final 20 seconds.

Both teams can take the can’t-get-any-worse approach to Game 2 (9:30 ET, TNT). Golden State lost Green, got subpar shooting from its backcourt stars, got outscored on 3-pointers, allowed Memphis’ Ja Morant and Jaren Jackson Jr. to combine for 67 points and still won the game.

The Grizzlies, meanwhile, had a 39-hour turnaround from their first-round clincher in Minnesota, got next to nothing from Dillon Brooks (eight points, 3-13 FGs) and Desmond Bane (nine points, 3-10), got blistered 36-29 in the third quarter and still only lost by one.

Morant was invited by the Warriors to shoot from outside and his 11 3-point attempts were his second-most all season. Yet he only shot three free throws. Jackson might have trouble replicating his opening performance, given his ongoing foul troubles.

Oh, and there was criticism of Memphis coach Taylor Jenkins for going too deep into a bench that got outscored by Poole all by himself, 31-30. So he probably lumps himself in with the players when he talks about obvious things the Grizzlies can do better.

“We responded last series,” Jenkins said. “Obviously a different level of playoffs now in the second round, but our guys have always shown that ability to turn that page, get better, understand where we need to be [ticked] off. We can beat this team if we play to the standards and capabilities that we are capable of.”

Steve Aschburner has written about the NBA since 1980. You can e-mail him here, find his archive here and follow him on Twitter.