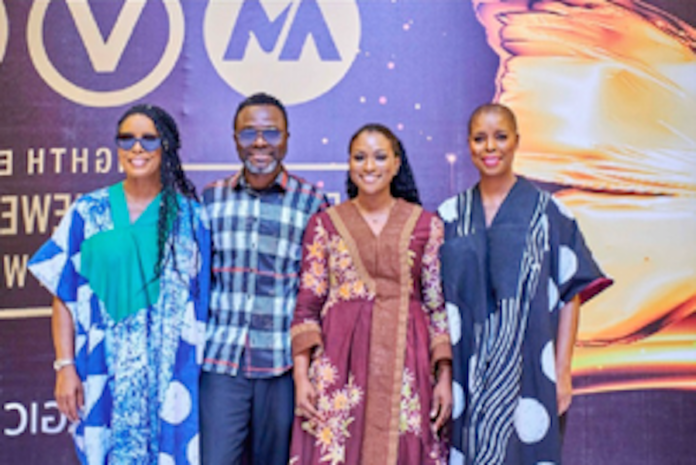 The eighth edition of the Africa Magic Viewers Choice Awards (AMVCA) recorded an array of firsts. From the first fashion show to the African cultural day, the award show was a celebration of African creativity.

However, one of the outstanding features of this year’s AMVCAs was the cross-cultural collaboration between the Nigerian film industry and the American film industry.

A specific day was dedicated to discussing the challenges peculiar to each industry with the intention to collaborate in the future.

Tagged the ‘Hollywood Meets Nollywood Brunch’, Hollywood stars like Tasha Smith who is an actor and director, and her sister Sidra who is the Head of Essence’s Film and TV Studio as well as Bayo Akinfemi of the popular TV show  ‘Bob Hearts Abishola’, Brandon Micheal Hall of the ‘God Friended Me’ series and Hollywood Director, producer, writer and New York film Academy lecturer, Grant Housley of Paramount Pictures, were joined by Nollywood stars which included Kate Henshaw and Kemi ‘Lala’ Akindoju who moderated the session.

Being the first time the awards had a Hollywood contingent, the conversations at the session were robust. Attendees were interested in how to make it big in Hollywood and other information that will help them develop their skills better.

At the end of the day, partnerships were hinted at and Tasha pledged to give full scholarships to her acting academy to 20 actors and actresses. The announcement was received with applause. But it is also a testament to MultiChoice Nigeria’s commitment to engendering collaborations with other film industries. Dedicated to training and building partnerships, the company continues to look at avenues to elevate the status of Nollywood and African films generally through different narratives. Much of this is seen on its Africa Magic channels, where rich stories from the continent tell the African story without filters. Already, through its MultiChoice Talent Factory, it is grooming the next generation of filmmakers who will be exceptionally skilled in the art and business of filmmaking and birthing new ideas to move the industry further.

Interestingly, the Hollywood and Nollywood meet was a collaboration with the Most Influential People of African Descent (MIPAD) team as part of efforts to build international partnerships in film. But more interestingly, it happened in Africa month, May. Thus, the AMVCA ensured it was a celebration of everything African by showcasing rich cultural diversity and the desire to reward and attract talent from across film genres.

Take, for instance, the awards had categories that rewarded talent across other regions of Africa. The award hosts were also from different parts of Africa. South African media personality Bonang Matheba was the co-host while Ghanaian actress Sika Osei was the red carpet co-host. Journalists, bloggers and influencers from Uganda, Tanzania, Namibia, Ghana and Kenya were among the guests that converged at the Eko Convention Centre where the show took place.

The beauty of African culture was on full display on the dedicated AMVCA Africa cultural day. Zulu dancers dazzled guests with their breathtaking stunts and steps.

Indeed, the eighth edition of AMVCA was not only a celebration of African culture but a reminder that Africa is the global home of creativity.