Durability continues to be one of Giannis Antetokounmpo's greatest strengths - bdsthanhhoavn.com Skip to content 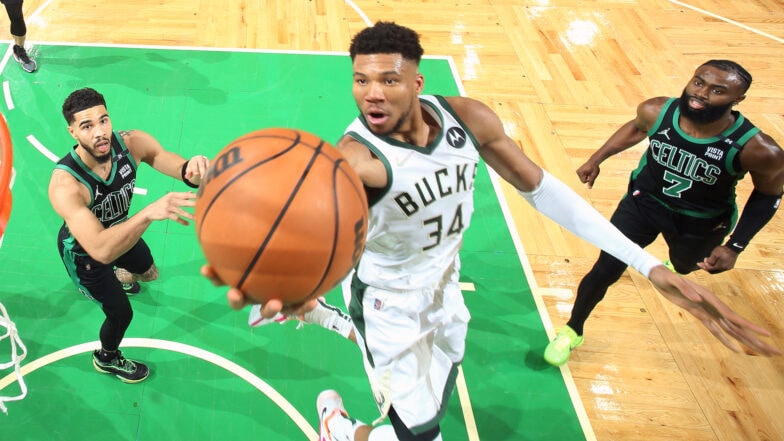 Giannis Antetokounmpo has played in 70 of a possible 73 playoff games in his NBA career.

BOSTON — He’s a Freak because of his size, length, height and way of making those limbs coordinate in beautiful harmony.

But the other freakish part about Giannis Antetokounmpo? His amazing ability is equaled by his chronic availability.

He is human, after all, with flesh and blood, although you rarely see either exposed helplessly on the floor. Giannis is almost indestructible that way, which makes him a rarity in today’s NBA: A superstar who plays with and through contact, yet rarely gets hurt.

There was a moment in Game 1 of the Bucks’ Eastern Conference semifinal series with the Celtics that would’ve shaken other players to the bone. Giannis collided with Daniel Theis, who’s all muscle and tattoos, and fell noticeably hard. So what happened? Giannis merely flicked away the pain, if there was any, and jumped to his feet. Meanwhile, none of the Bucks showed the slightest amount of concern.

Even though he’s dealing with ankle and wrist pain, which is more of an annoyance than anything, Giannis plays through and plays on, and just laughs when someone raises the topic.

“First of all, I thrive on physicality,’’ he said. “I love feeling beat up after games.”

“You probably think I’m a weirdo.’’

Giannis’ teammates were impressed by his self-pass off the glass for a dunk.

Actually, more like a freak of nature. Giannis has only suffered a semi-serious injury once in his nine-year career — more on that in a bit — which is rather unusual, given how much attention he draws near the hoop and how many times he lands on the floor. He’s the anti-Anthony Davis in that regard, a star who always finds a way to play and a franchise player who doesn’t make a habit of being load managed.

The list of stars and franchise players who haven’t been as fortunate is lengthy: Steph Curry, LeBron James (recently, at least), Kevin Durant, Kawhi Leonard, Joel Embiid, etc., etc. Every year, it seems, someone falls prey to something. Only Nikola Jokic is Giannis’ equal in terms of durability and reliability.

Much of this is due to Giannis’ physical development. As a rookie, he was skinny, just a bundle of limbs flying everywhere. Since then, Giannis added muscle without the bulk while maintaining his athletic ability.

“He’s an amazing talent and someone who takes care of himself and prepares himself the right way,” said Bucks coach Mike Budenholzer.

Also, once he became a constant All-Star, the Bucks never ran him into the ground. His games aren’t managed, only his minutes. Giannis has averaged only 32 minutes a game for his career, which is a light load compared to other players on his level. Rather than sit out games, Giannis just plays when needed, and not much more.

Keep in mind that Giannis, with the ball, plays downhill — constantly charging at the basket, with occasional body contortions, and attracting contact. That should increase the chance of something happening, correct? Well, in one sense, yes: Over the last five years, he’s averaging almost 10 free throw attempts per game, a testament to his ability to draw fouls. Yet, he rises from the floor each time.

Until last spring, when he didn’t. Who could forget how Giannis sent a chill through Milwaukee when he suffered a hyperextended left knee injury in Game 4 of the Eastern Conference finals against the Hawks? The graphic fall and his immediate grab for the knee and facial expression let you know this wasn’t just a stumble. Giannis didn’t finish that series — the Bucks won anyway, helped coincidentally by a freak Trae Young injury when he stepped on a referee’s foot — and Giannis’ status in the NBA Finals was initially in doubt.

He played anyway — never missed a game, actually — and became stronger and sturdier as that series went on, closing out the Suns in style with a 50 piece.

And now this season, aside from nagging issues, Giannis seems determined to duplicate last year’s title run. He hasn’t missed a playoff game and once again is extremely active at both ends of the floor, especially at the rim, where contact is constant. He’s averaging more rebounds (13.3), assists (7.2) and blocks (1.5) than he did last postseason. Meanwhile, the Bucks are dealing with the absence of Khris Middleton.

Because of that, Giannis’ impact only became greater for the Bucks, especially his improved passing and court awareness, which allows teammates to get open looks.

Giannis’ ability to stay upright will be put to test against the Celtics. Not only are they a top defensive team, they bring size with Theis, Robert Williams III and Al Horford. That’s not to say either of those three will slow Giannis — as he showed in Game 1, he presents a different challenge than what the Celtics saw in the first round with Kevin Durant — but he’ll absorb his fair share of contact.

With the approach of Game 2 on Tuesday (7 ET, TNT), the Celtics are in a must-win situation if only to avoid losing twice at home against a Milwaukee team coming off a championship run and with Giannis looking as formidable as ever.

As great as Giannis has been the last five years, where he created a case for himself — with two Kia MVPs, a Kia Defensive Player of the Year, a championship and a Finals MVP — that he’s the premier talent in the game, none of that matters if he can’t suit up.

If the best ability is availability, then Giannis is winning on two fronts. The game’s best player cannot be stopped or, as it turns out, slowed.

Shaun Powell has covered the NBA for more than 25 years. You can e-mail him here, find his archive here and follow him on Twitter.