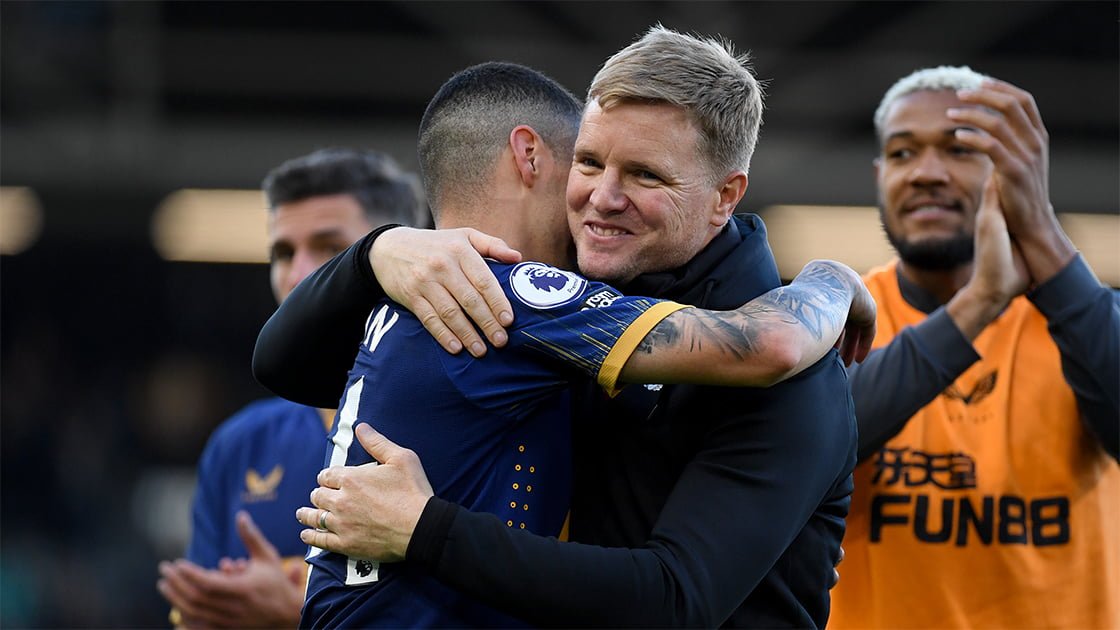 Eddie Howe watched his players absolutely dominate and win 2-0 on the opening day of the season,  Newcastle defeating Nottingham Forest on 6 August 2022.

I doubt he ever imagined it would take another eight weeks until he could next enjoy the afterglow of a Premier League win.

Yet despite so many good to very good performances, that has been the case, Saturday at Craven Cottage at last allowing Eddie Howe and his players to taste victory, after a frustrating period of five draws in six Premier League matches.

Eddie Howe telling his players to ‘enjoy the moment’ before the work begins again for the home match with Brentford on Saturday.

Eddie Howe asked after Fulham 1 Newcastle 4, what he had said to the players:

“It was great to celebrate with our supporters at the end.

“A long time since we had that connection with them in a positive way (after a Premier League win).

“I was very determined for the players to really enjoy that moment, we now go back to training and work hard to feel that again next week.

“I hoped it (the second Premier League win of the season) was coming but nothing is ever guaranteed in football.

“Every week you have to give yourself a chance to win and I think we have done that (this season).

“We haven’t finished our chances when they have been there (in previous matches) and we have let the games slip away from us that were winnable.

“Today was a pivotal moment in our season.

“I emphasised today how important the game was to the players, it can then go one or two ways from that point, but they responded really well.

“It has been a long time coming and right from the start we had a good feeling, with good energy and created chances early on.

“Obviously, the red card made it easier but I am very pleased with the players’ response and their attitude, we wanted more and we weren’t happy with what we had, always trying to score.

“It’s been a very difficult two weeks. Obviously, we have had the international break, with players going away, but we have also had a bit of illness in the camp, so it’s been a mixed two weeks but it didn’t show in our performance.

“”Today was a day that was all positive for us, a really good performance from the group, a very important game for us and we knew we needed to win.

“We knew we needed to perform well, we know how difficult this ground can be and how good a team Fulham are.

“The sending off certainly helped us, but even before that I felt there was a good feel about the team, I thought that the body language and our attitude to the game was spot on.”

The challenge on Sean Longstaff and red card for Chalobah:

“It’s difficult and I haven’t seen it again but my initial feeling was it’s high.

“I thought Sean was lucky to get up from that one.

“That is without seeing it again, so I might stand corrected, but the referee probably had a similar view by giving the red card.”

“Crystal Palace last year, the goal he scored that day was an individual goal and had similar parts to it to today’s goal.

“He is capable of doing magical things and for me that was a magical goal.

“Bruno again was involved and they have got a really good understanding the pair of them.

“I am delighted for Miggy. He is such an infectious character and his work sort of epitomises our play, so it was great to see.”