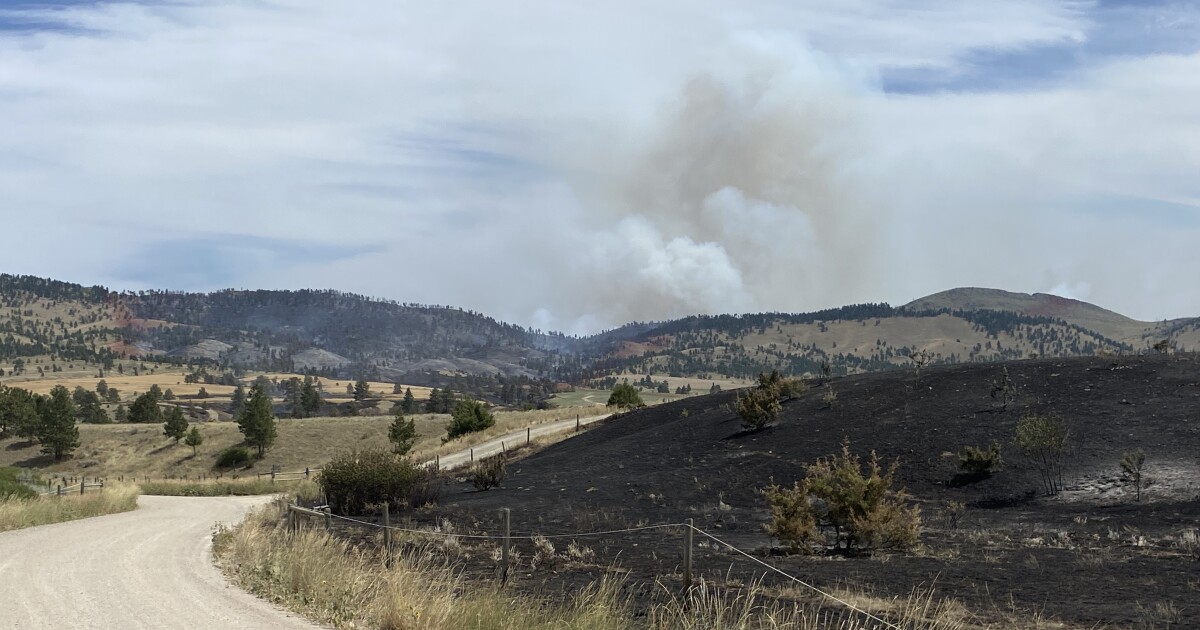 UPDATE 7:50 PM: At a public meeting on Friday, leaders on the Matt Staff fire lifted the remaining evacuation orders.

Investigators also say they had narrowed down the possible ignition source to a discarded cigarette butt or chain dragging along the ground.

Fire managers continue to reiterate that drones should not be flown in the fire area.

The Bureau of Land Management also announced Friday the immediate closure of its managed lands in the area near the fire.

FIRST REPORT: The Matt Staff Fire – the fast-moving wildfire that started outside East Helena Thursday – continued to burn in the Spokane Hills Friday. Authorities say the weather conditions weren’t as difficult as the strong, erratic winds they saw when the fire began, but it’s moved into an area that tough for firefighters.

“The fire’s currently in some rough, rugged terrain where road access is difficult, or roads into the fire are narrow and difficult to traverse,” said Wyatt Frampton, fire information officer for the Montana Department of Natural Resources and Conservation. “They’re working on improving access, and there are handcrews and heavy equipment working their way around the fire where it’s safe and possible to do so.”

DNRC’s County Assist Team took over responsibility for the fire at noon on Friday. They estimated it has burned just over 1,500 acres as of that time. There is no estimate yet on containment.

About 125 personnel are currently supporting the response to the fire, including state, U.S. Forest Service, U.S. Bureau of Land Management, and local volunteer firefighters from Lewis and Clark and Broadwater Counties. Seven aviation units are assigned, from helicopters to large air tankers.

On Thursday, the fire burned quickly along the south side of Matt Staff Road, before winds pushed it up a ridge and into the Spokane Hills. Despite the challenging conditions, though, no homes were destroyed on that first day.

“It’s amazing with the wind we had, the high temperatures we had – it was a blessing not to lose any homes,” said Lewis and Clark County Sheriff Leo Dutton.

One outbuilding may have been damaged.

Dutton said authorities have narrowed down where the fire began to a small area next to U.S. Highway 12. What started it still under investigation, but they believe it was human-caused.

“Across the state, we’re seeing an increase in fire danger,” Frampton said. “We’d like to remind the public that we need them to do their part to help prevent human-caused fires.”

Authorities are again telling the public not to use drone aircraft in active fire areas. During the day Friday, air operations had to be temporarily suspended because of a drone flying in the area.

“You just stopped the firefighting efforts,” said Dutton. “If you’re a homeowner and see somebody flying a drone, know that we can’t protect. So we’re going to investigate and see if we can find out who was flying that drone, because there’s healthy fines with that. You cannot do that.”

According to DNRC, Lewis and Clark County has maintained its evacuation order for West Shore Drive, along Canyon Ferry Lake, south of the Lewis and Clark day use area. In addition, Broadwater County is continuing evacuations for residents on Jimmy Green Road.

Also on Friday, the Bureau of Land Management announced they would close all public lands they manage in the Spokane Hills, north of U.S. Highway 287 and south of Canyon Ferry Road. They asked the public to avoid the area for safety and to allow firefighting operations to move forward.

A public meeting on the fire will be held at 7 p.m. Friday, at Tri-Lakes Volunteer Fire Department Station #3, at 3200 Spokane Creek Road.