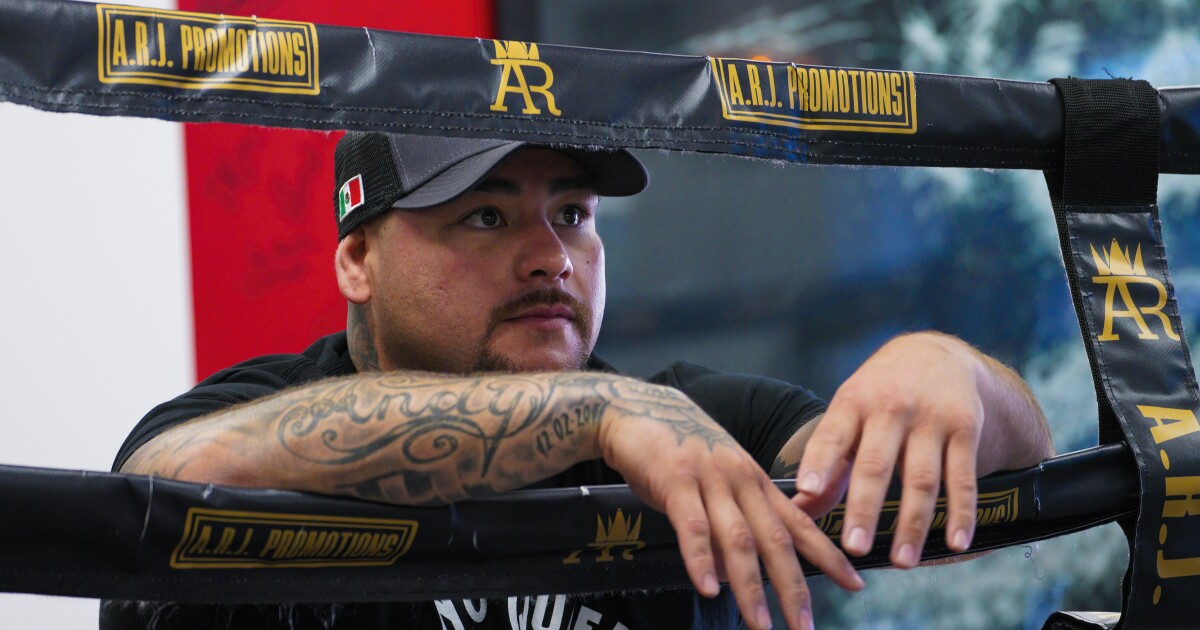 On the wall of a private boxing gym sandwiched between a liquor store and a Mexican drive-through, there’s a photo of Andy Ruiz sprawled on the canvas at Madison Square Garden as Anthony Joshua towers above.

At quick glance, the June 1, 2019, image seems an odd choice to display, given the deflating moment from a heavyweight championship fight that was the pinnacle of his career.

For the Imperial native, that photo is equally important as the one framed next to it that shows the roles reversed as Ruiz stands over the toppled champion during the sport’s biggest upset in a generation.

Soon after collecting title belts from four sanctioning bodies, appearing on “Jimmy Kimmel Live!” and being invited to meet the president of Mexico, came the fancy cars, the partying and the slack training.

In the Joshua rematch six months later in Saudi Arabia, an overweight and overmatched Ruiz lost by unanimous decision. Though Andy Ruiz Sr. said this week his son was not 100 percent healthy in that fight without revealing details, the WBA, IBF, WBO and IBO titles vanished.

In the wake of the wild rise and fall, depression engulfed Ruiz.

“I felt low. I felt depressed,” said Ruiz, the first boxer of Mexican descent to win a heavyweight title. “I felt like I let my whole family, my whole country and my fans down. A lot of people were looking up to me. They were counting on me. I feel like I let everyone down.

“And not just them. I let myself down.”

Ruiz considered walking away from the sport after the loss, but returned to the ring in January 2021 for a unanimous-decision win over Chris Arreola. Seventeen months later, he’ll face Cuban slugger Luis Ortiz in a pay-per-view fight on Sept. 4 at Crypto.com Arena in Los Angeles.

“I think the age doesn’t matter in the heavyweight division, because one punch could change the whole fight,” said Ruiz, who is 34-2 with 22 knockouts. “It’s a whole different game.”

The road back has been as much mental, as physical.

“There were a lot of distractions,” said Andy Ruiz Sr. “I noticed and spoke to him several times, ‘Be the same hungry man you were before. The money’s nothing. Be the person you were then. Let’s make history.’

“Now he’s really focused. He wants that belt back.”

One sign: The scale says 265 pounds, rather than his post-title rise to more than 310.

“That’s the weight I want to fight at,” Ruiz said. “(Ortiz is) a big guy. I need to carry that weight to feel strong. I need to have that gordita power in me.”

Gordita means chubby in Spanish. That’s part of what endeared Ruiz to the masses, winning a world title without fitting into the body-shape expectations thrust on top athletes.

Crowbar abs are nice, but they’re not Ruiz, or at least the version he believes to be his truest self.

“By being chunky, showing everybody that it’s possible to follow your dreams and make them come true, no matter how you look,” he said. “I’m not trying to look the part, I want to be the part.”

Each day, the neighboring drive-through taunts.

“Right there,” Ruiz motions with a hearty laugh. “Now we have our meal preps. We eat really good. Chicken, rice, vegetables. We have our cheat days during the week to keep this as fun as possible, but we’re disciplined.”

In the gym, a banner promoting the first fight with Joshua in 2019 is draped over the ring ropes.

“I am a little tired of everyone saying congratulations for June 1,” he said. “I want to make more stories. I know if I stayed disciplined and dedicated to this sport, I would still be champion right now.

“Everything happened so fast. I was living in the moment. I was over here. I was partying over here. It was like I totally forgot about the rematch I had. That’s one of the ‘horror’ things I have in my head. I don’t want to do that again.

“All I need is a second chance. If you stay disciplined and hungry, the mind is such a powerful thing. If you want to conquer something, you will.”

The fog has lifted, Ruiz promised.

“I’m more motivated,” he said. “I’m back where I started. I’ve got to get on the ladder and climb back up. We’ve got to go through obstacles in this life. Everyone’s life has roller-coasters.

“When you get dropped, you’ve got to fight back.”