As the National Wrestling Alliance winds down its stay at the Knoxville Convention Center, there is rematch with The Hex try to reclaim the NWA Women’s Tag Team titles from Pretty Empowered, and “Magic” Jake Dumas wanting to make AJ Cazana disappear.  Not a bad way to close out the KnoxOut portion of the show.

We go to May Valentine with her first “interview” with Gaagz the Gymp.  She asks what makes him happy inside.

Folks, a picture is worth a thousand words… 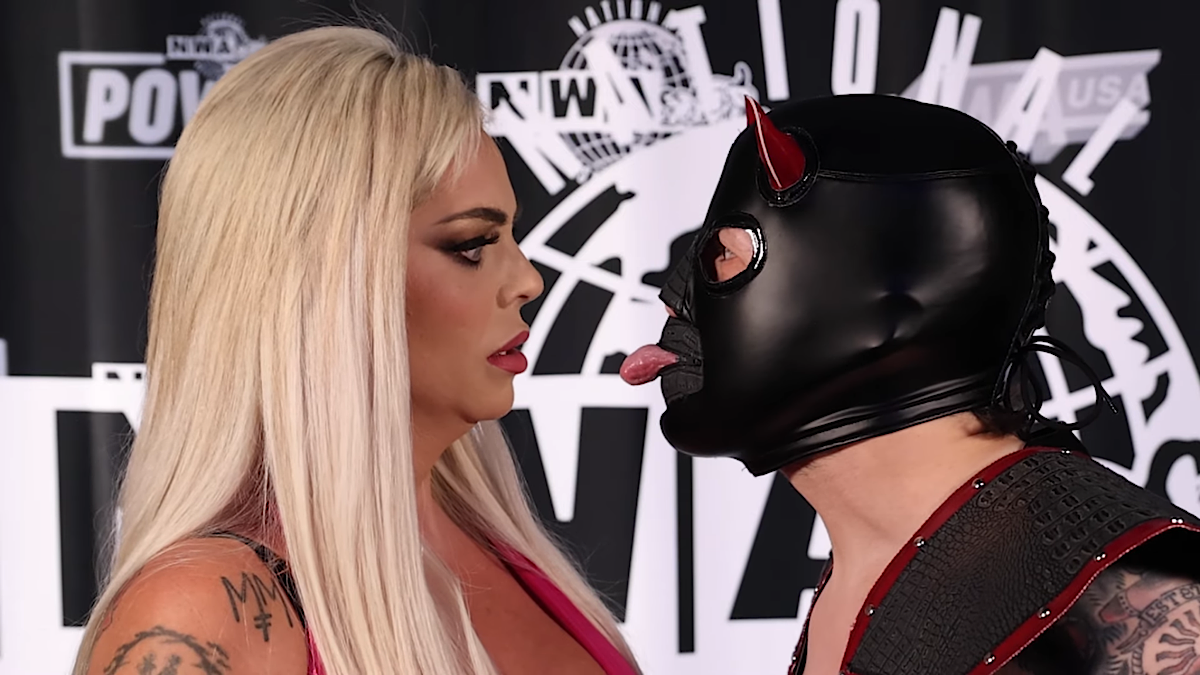 Valentine says something in Portuguese, and while I may not get the language, I get the gist of the lingo.

Anywhoo-sles, Joe Galli, Tim Storm, and Velvet Sky have the call on this NWA USA, and they throw it to Kyle Davis in the ring, who interviews BLK Jeez.  Of course Austin Idol tags along, and Jeez shares his thoughts on their partnership.  Jeez states as soon as IdolMania linked up with The Church’s Money, they got the money and they got the NWA Television title. The fans jeer at Jeez to his chagrin, and as Idol speaks, a welcome distraction in Gaagz the Gymp comes out and gets in Jeez’s grill, and it’s gonna be settled in the ring.

The Gymp calls for the zipper, but Jeez stops that and gets a back suplex.  He throws Gaagz outside, and Idol adds to the interference, as the fans are running wild for Gymp-a-Mania™.  Jeez slams Gaagz to the floor and throws him inside the ring to cover for a two count.  Jeez continues the attack with a scoop and a slam, and now he attempts a double stomp, but Gaagz rolls away as he misses.  Gaagz fires up, and gets a crossbody for a two count.  Then the crowd goes wild as he unzips the mask, but Jeez rolls him up to get a two count.  Gaagz gets Jeez in the Gaagz Reflex (reverse DDT) for the pin and the win.

Once again, Gymp-a-Mania™ is running wild in the NWA.

But how’s about a little magic with… 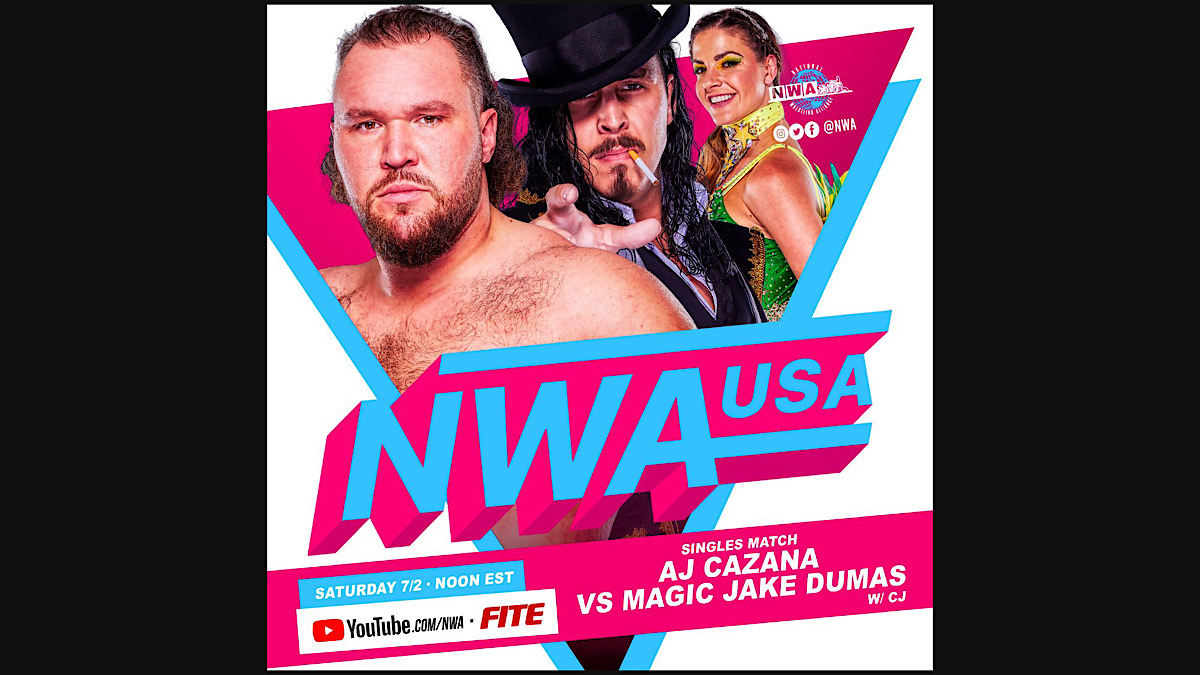 Courtesy of the NWA

Galli and company state that the Cazanas are a fixture in the wrestling scene and they were able to ensure the success of the Alwayz Ready PPV.  Also of note, there’s still no chemistry between CJ and Dumas, but if there’s anything I love it’s a dysfunctional pairing (especially if I’m not involved, but enough about Provo, UT.)

The Knoxville fans are solidly behind Cazana, and he goes right to work on Dumas.  He gets a couple of slams on the “Magic” one, but he gets a card to distract Cazana with sleight of hand that turns into a legsweep and, ta-da, he gets a two count.  Dumas then gets an atomic drop to a superkick and covers for another two count, and CJ is a bit late to celebrate the latest trick.

Dumas goes for a neckbreaker and wants CJ to highlight it, but Cazana reverses an inverted elbow drop for a two count.  Cazana goes for another pin, but all of a sudden, CJ gets up the apron to distract the ref. Dumas rolls out and Joe Cazana clocks him and sends him back in the ring. Now Cazana gets a spinebuster and picks him up to fish him off, but Dumas reaches the top ropes.  Meanwhile, CJ gets the tie that Dumas had and trips up Cazana and hangs on to the leg, and Dumas pins him, with the ref unable to see the chicanery.

Oh, yeah, Dumas and CJ pulled off a great magic trick this match.  Penn and Teller, they ain’t, but this has some legs.

Now it’s time for the Main Event, and it’s for the… 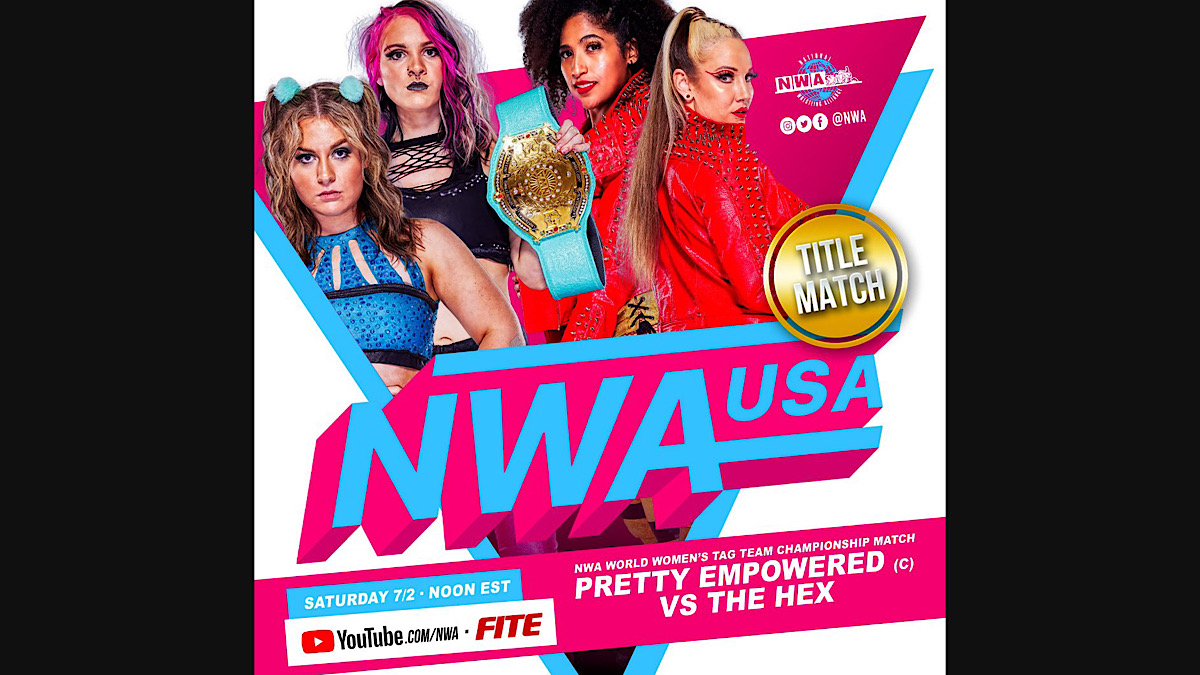 Courtesy of the NWA

As soon as Davis introduces the former champs, Kay and Belle run out and they take to the champs right away and drag Paige and Envy to the outside, and they light them up with chops and then knock the heads of Pretty Empowered.  Now Belle and Paige are in the ring, and Envy distracts Belle enough to give her tag partner the advantage.  Paige and Envy isolate Belle in the corner, thus making her a Hex in Peril.  It looks bleak, but Belle makes her way for the hot tag to Kay, and she is an AK en Fuego

Kay lands with a swinging neckbreaker to Envy to cover, and Paige breaks the pin count.  Kay then gets Paige in a Saito suplex, and then she and Belle attempt to set up Envy for Hex Marks the Spot, but Paige pulls Belle out of the ring.  Kay plants Envy with a package reverse tombstone to cover, and Paige gets in the ring and nails her with a superkick to the head to break the count.  Envy goes outside and grabs a belt and clocks Kay to cover while the ref was distracted, but Paige sees what took place by her tag partner and is torn. As Belle makes her way to save her tag partner, Paige makes Sophie’s Choice and cuts her off as Envy gets the pin again for the one, two, and three.

After the match, Envy and Paige are arguing about the outcome, and Paige clearly did not want to win that way. Envy is comfortable with the win as the show goes to credits.

This was, by far, the best showing of the KnoxOut show.  Dumas and CJ are now showing that they make a great pair, and I’d like to see what other tricks they can conjure, if you will.  The drama between Envy and Paige will be a fun dynamic in the weeks ahead.

I gotta prepare for Money in the Bank PPV, so see ya next Saturday.