The 250 Class kicked off the afternoon with its opening moto, which saw Monster Energy Star Yamaha Racing’s Justin Cooper jump out to the early lead with the MotoSport.com Holeshot ahead of Rockstar Energy Husqvarna Factory Racing’s Jalek Swoll and Troy Lee Designs/Red Bull/GASGAS Factory Racing’s Michael Mosiman, while Lawrence slotted into the top 10. As the field jockeyed for position behind him, Cooper soon established a multi-second lead.

An intense battle for second sustained through the opening 10 minutes of the moto, as Swoll and Mosiman traded momentum, but eventually Mosiman made a pass stick and looked to chip away at his deficit to the lead. Swoll continued to drop back and soon was forced to deal with Monster Energy/Pro Circuit/Kawasaki’s Seth Hammaker and the Team Honda HRC duo of Jett and Hunter Lawrence in a four-way battle for third. Back out front, a slow lap by Cooper, combined with the fastest lap of the moto by Mosiman, allowed the GASGAS rider to take advantage and seize control of the lead just before the halfway point. Shortly thereafter, Jett Lawrence made the pass on Swoll for third.

As the moto approached its final 10 minutes a sibling battle for third began to unfold between the Lawrences, with Hunter making quick work of his brother to move into podium position. A couple laps later, he went down and lost multiple positions, which moved Jett Lawrence back into third as Hunter remounted in sixth.

Mosiman was in a class of his own out front and easily controlled the remainder of the moto to secure the first moto win of his career, 3.4 seconds ahead of Cooper. The battle for third once again came down to the Lawrence brothers as Hunter rebounded from his early misfortune to put the pressure on Jett for third. However, Jett dug deep and kept Hunter at bay for the position. Monster Energy/Pro Circuit/Kawasaki’s Jo Shimoda rounded out the top five.

The second moto got underway with Cooper once again at the head of the field for the MotoSport.com Holeshot, followed closely by Jett Lawrence, Swoll, and Monster Energy Star Yamaha Racing’s Nick Romano. Mosiman fought his way into fifth after a quarter lap and continued to move forward. Out front, Cooper went off track and was forced to give up the lead to Lawrence before he reentered in second, ahead of Romano.

Lawrence settled into the lead ahead of Cooper as Mosiman looked to move into the top three. However, misfortune struck the Moto 1 winner and left his bike in need of attention, which ultimately took him out of contention for his first career victory. That left the fight for third to be waged between Romano and Shimoda. After a persistent challenge the Japanese rider made the move on the rookie and took control of third. Important passes took place behind him as Hunter Lawrence battled his way from a start deep in the top 10 to move up to fourth.

The lead trio settled in through the halfway point of the moto, but as the race wore on Shimoda emerged as the fastest rider on the track. He closed in on Cooper for second and showed patience before making the pass stick with just over eight minutes to go. From there, Shimoda set his sights on the lead and mounted his attack on Jett Lawrence. As Shimoda navigated through alternate lines in search of a way around, a slight miscue caused him to get stuck in a rut and tip over, which dropped him from second to fourth.

Lawrence looked to maintain about a two-second advantage over Cooper and a hard-charging Hunter Lawrence in the waning laps, where lapped riders continued to provide additional challenges. Cooper kept the Honda within reach but was unable to get close enough to mount a serious challenge, which allowed Hunter Lawrence to apply pressure from third. The elder Lawrence gave it his all and made the pass happen on the last lap.

Jett Lawrence carried on to his third moto win of the season, 2.2 seconds ahead of his brother, while Cooper rounded out the top three.

Despite feeling under the weather, Jett Lawrence prevailed for a second straight win. His seventh career victory came on the heels of 3-1 moto finishes, while Cooper followed in the runner-up spot following a 2-3 effort. Hunter Lawrence completed the overall podium with his second straight top-three result thanks to 4-2 scores.

The victory allowed Jett Lawrence to add to his early lead in the 250 Class standings, where he now sits 11 points ahead of Hunter Lawrence. Shimoda, who finished fourth overall (5-4), sits third, 23 points out of the lead.

“It’s been a rough one today. Being sick made it really difficult on me and I even threw up before the second moto. In that second moto I was just pushing all the way through. It was a difficult day but I’m just pumped to be up here (on the podium). Hopefully we can move on from this and continue with the season.”

“From 12th overall last weekend to being on the box (podium) in both motos today is just what I wanted to do. It was important to start up front and battle with the leaders. That’s the kind of turnaround we needed. We’re back in the mix now and we’re ready to start fighting for these wins.”

“Jett (Lawrence) and I have both been a bit under the weather so it’s been tough, but not a bad day for a bad day. My starts have been terrible, but we’ll work on them and come back swinging next weekend. I’m happy with my riding and we’ll try to give Jett a challenge.” 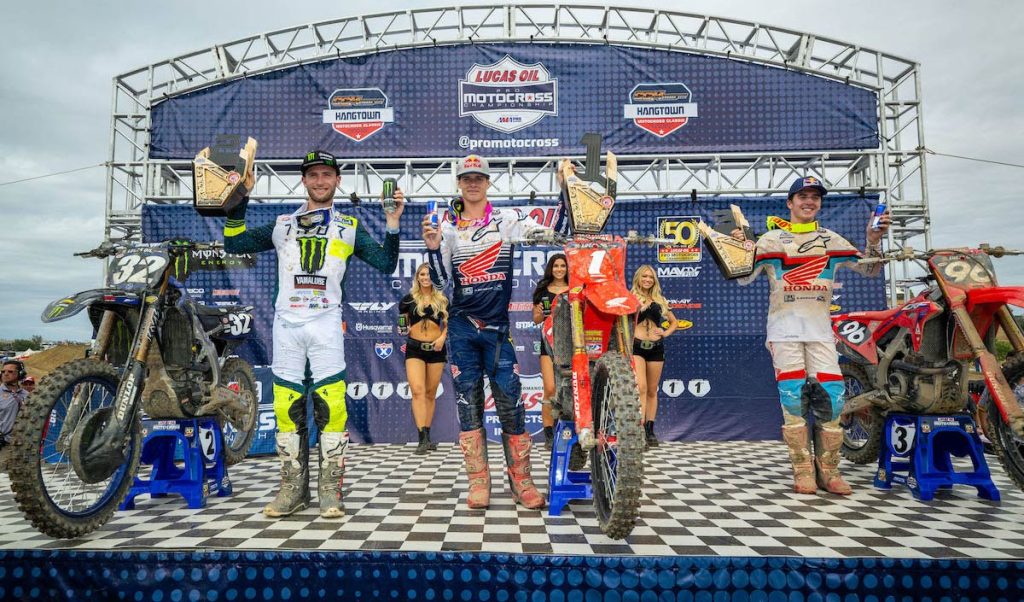 As the 450 Class field roared through the first turn to begin the opening moto it was point leader and Team Honda HRC rider Chase Sexton and Anderson side-by-side to determine the MotoSport.com Holeshot, with Sexton prevailing to grab the early lead as Team Honda HRC’s Ken Roczen followed in third. Sexton pushed the pace on the opening lap to put several bike lengths between he and Anderson, as the pair also inched away Roczen.

The lead trio sprinted away from the rest of the field as Monster Energy Star Yamaha Racing’s Eli Tomac, Red Bull KTM Factory Racing’s Ryan Dungey, and Monster Energy Star Yamaha Racing’s Christian Craig gave pursuit. Back up front, Sexton, Anderson and Roczen settled into their respective positions through the halfway point of the moto, but Roczen would lose touch after contact with a lapped rider almost took him to the ground.

Anderson picked up the pace over the closing stages of the moto and moved to within striking distance of Sexton. The gap between them fluctuated as they navigated through lapped traffic, with Anderson arguably getting the better end of those passes. With three and a half minutes to go, Anderson pulled the trigger and got past Sexton on one of the track’s off-camber corners. Once out front, Anderson dropped the hammer and attempted to sprint away, but the Honda rider resisted and kept the Kawasaki within reach.

As the lead pair took the white flag they were separated by just a couple bike lengths. Lapped traffic factored into their battle and allowed Sexton get alongside, but Anderson countered the pass attempt. That proved to be the difference maker as Anderson held on to take the fourth moto win of his career by a mere three tenths of a second. Roczen followed in a distant third, with Tomac fourth and Craig fifth.

The deciding 450 Class moto kicked off with Red Bull KTM Factory Racing’s Antonio Cairoli, a nine-time FIM World Motocross Champion, out front for the MotoSport.com Holeshot, but he was quickly overtaken by Roczen, while Sexton slotted into third with Anderson just outside the top five. In trademark fashion, Roczen laid down a blitzing opening lap and opened a 1.5 second lead over Sexton, who moved into second, as Cairoli did battle with his KTM teammate Dungey.

As the Honda riders gapped the field, the attention shifted to Anderson as he looked to work his way forward from a sixth-place start. He was successful in doing so and passed both Dungey and Cairoli to move into fourth behind Tomac. Back out front, Sexton closed in on Roczen for the lead as the Honda teammates duked it out for the top spot. Sexton made a savvy move to take control of moto 10 minutes in, but Roczen stayed close and kept the battle going.

It wasn’t long before Tomac made it a three-rider affair at the head of the pack as the moto approached its halfway point. Tomac made his way by Roczen for second and looked to erase a 2.3 second deficit to Sexton. As this occurred, Anderson started to inch his way into the picture from fourth. The battle for the lead intensified with 10 minutes remaining in the moto as Tomac was all over Sexton’s rear fender. The Yamaha rider bided his time and made the pass happen with eight minutes to go. As Tomac took control of the lead Anderson responded in his own way with a pass on Roczen for third.

Just like Moto 1, Sexton showed his fight and kept within striking distance for several laps, but Tomac started to open the gap. As they started the final two laps, Sexton had clawed his way back and moved to within a second and a half of Tomac. In a near replication of the first moto Sexton got next to Tomac on the last lap, but couldn’t make the pass happen. The Yamaha rider took his first moto win of the season by 1.2 seconds over Sexton, while Anderson finished a strong third.

One of the closest finishes in recent memory saw the overall podium separated by just two points. Anderson’s first win in 12 years and 92 career starts came via 1-3 moto finishes, which edged out Sexton’s 2-2 performance by a single point. Tomac’s 4-1 effort left him two points shy in third. Anderson became the 74th different 450 Class winner in history.

Sexton’s runner-up effort allowed him to extend his lead in the 450 Class standings to 12 points over Roczen. The win moved Anderson up to third, 18 points out of the lead.

“I had to work to get up there (in the second moto). Honestly, I thought I only got on the podium, but after I pulled off the track I realized it was a win. It was 12 years too long, but we finally got it done. I’m damn happy. Let’s keep it going.”

“I just couldn’t get away from them today. I led a lot of laps, but didn’t get the win. Overall, I’m happy with how I’m riding. To show some grit was good for me. I still have the red plate and just need to keep digging.”

“That was some fun racing right there. It felt good. Chase (Sexton) and I had a good battle. I found some good lines and got into a good flow. I’m happy to get on the podium for Yamaha and looking forward to next week.”

The Lucas Oil Pro Motocross Championship will continue next weekend with its annual visit to the mile-high altitude of the greater Denver area as Lakewood, Colorado’s Thunder Valley Motocross Park hosts the third round of the 50th anniversary season.