The most recent labor market information for the state is from April 2022:

In comparison to March 2022, the unemployment rate has dropped by 0.1% and compared to UI rates a year ago it has decreased by 1.9%. Texas has added 62,800 nonagricultural jobs in April 2022 and total nonfarm jobs reached 13,284,500. In April, Leisure and Hospitality gained 13,500 jobs over the month. Education and Health Services added 8,800 positions, followed by Financial Activities employment which grew by 8,700 jobs. Mining and Logging added 6,600 jobs which is a 3.2% increase from March 2022. (Texas Workforce Commission). 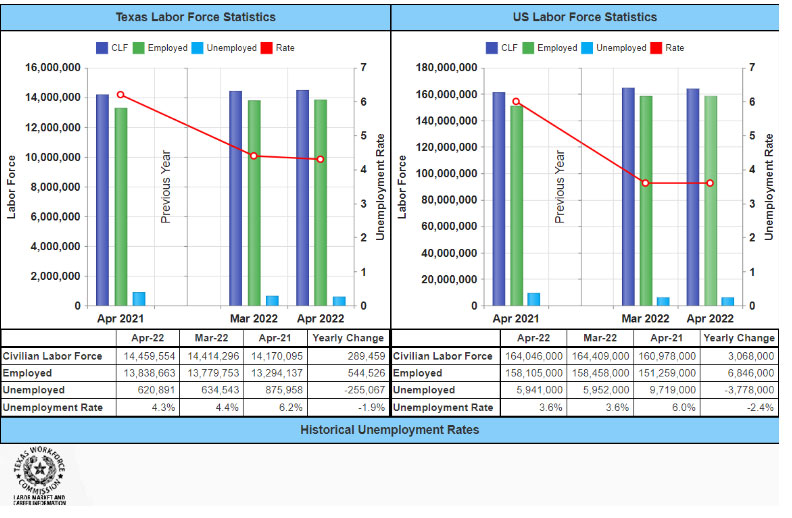 According to the Federal Reserve Bank of Dallas, Texas employment expanded by 5.7% in April after growing by 2.7% in March. Oil and gas saw the fastest growth followed by manufacturing and financial activities. Texas payroll employment reached 2.7% above pre-pandemic levels. The Dallas Fed’s Texas Employment Forecast predicts 3.7% job growth this year. 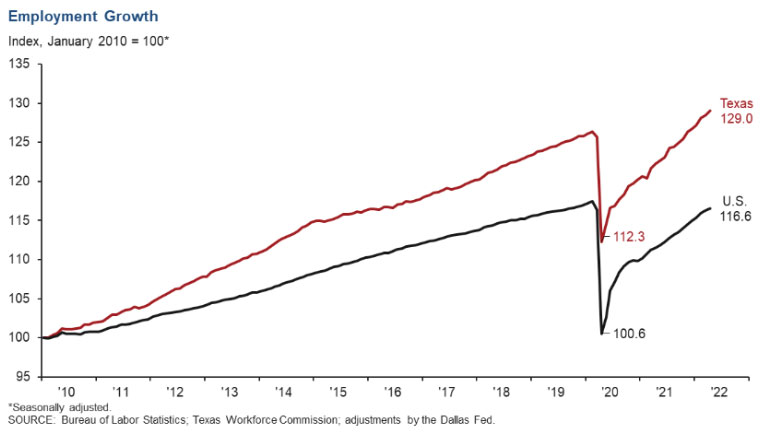 The Texas Comptroller is the states’ chief tax collector, accountant, revenue estimator and the agency is responsible for keeping the books for the multi-billion-dollar business of state government (Texas Comptroller). Additionally, the Comptroller monitors economic data around the state monthly and publishes regular periodicals. Every month, Texas Comptroller Glenn Hegar releases information on state sales tax revenue. Texas Comptroller Glenn Hegar announced at the beginning of May that state sales tax revenue totaled $3.8 billion in April, 12.8% more than in April 2021. The majority of April sales tax revenue is based on sales made in March and remitted to the agency in April. Comptroller Hegar noted that April state sales tax collections reached double digit growth which reflects both inflation and continued expansion in real economic activity and employment. He noted that the “strongest growth was in receipts from sectors driven by business spending, particularly the oil and gas mining sector” which has passed pre-pandemic levels. In terms of consumer spending, Hegar said “slowing growth in receipts from retail trade may signal shifts in consumer spending back toward pre-pandemic patterns.” (Texas Comptroller). 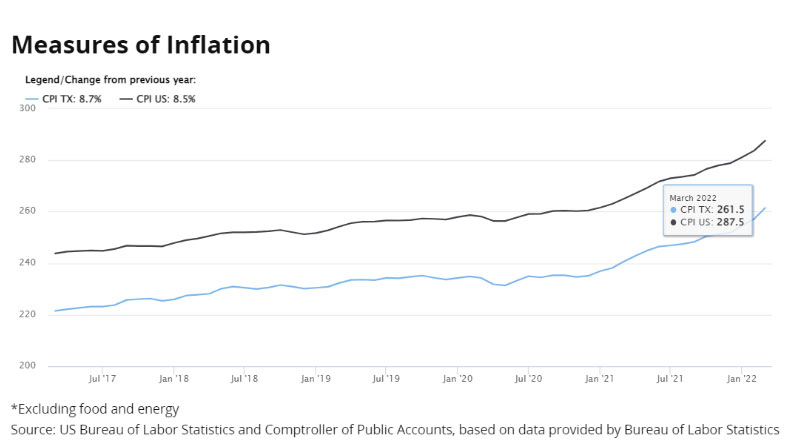 Major rating agencies, Moody’s, Fitch and Standard & Poor’s (S&P), issue ratings that characterize the state’s ability to repay debt. These agencies provide investors with assessments of the trustworthiness of potential investments in the state and possible risks involved. Additionally, highly rated borrowers typically pay lower interest costs. As of August 2021, Texas is top rated by all three of these agencies.

About: HillCo Partners was founded by Neal T. “Buddy” Jones and Bill Miller. It is a full-service firm that provides consultancy services for public and government affairs. The firm opened for business in 1998, and today, it is the top-ranked Texas lobbying firm. More information about the firm can be found on their website: www.hillcopartners.com. Compiled by HillCoPartners.com Staff