MAYBE THERE IS nothing new under the sun.

Ireland’s progress in 2021 has taken two games to curdle, and issues considered closed by Stephen Kenny’s contract situation are live once again. A couple of newspapers yesterday took the temperature of some twitchy board members and Kenny is yet again facing questions as to whether he is the right man for the job.

“Without a shadow of a doubt.” he said at yesterday’s pre-game press conference. “I’ve just a signed a new contract and I’m committed here until after the Euros. We’ve just lost two very, very narrow games that we are disappointed to lose.”

It’s true to say the defeats to Armenia and Ukraine were narrow but given last year’s form and the manager’s bullish, group-topping aspirations, Ireland were not supposed to be so vulnerable to fine margins in these games. Especially so away to a side ranked outside the world’s top-90 and at home to a Ukraine side with seven debutants and an entire second string.

Scotland visit Dublin today and Ireland have recapitulated to the awful place where the country is hoping rather than expecting a win. Nothing on the ledger would indicate a victory. Ireland haven’t won a competitive game at home since beating Gibraltar in June 2019, and haven’t beaten a side ranked ahead of them at home in a competitive game since beating Bosnia in November 2015.

Stephen Kenny has won just four of his 22 games in charge, and those wins came against Azerbaijan and Luxembourg and in friendlies against Qatar and Lithuania. And as for their Nations League record…it’s now 12 games without a win, in which only two goals have been scored. Only Iceland, Northern Ireland and San Marino have also failed to record a win thus far, and only San Marino have managed fewer goals.

The wretched Nations League start won’t bring a substantial change in approach this evening, however.

“We’re not far wrong. We’ve conceded from a goal from right on the touchline that took a horrific bounce and went into the far corner . These games are tight games. We’ve lost two games conceding with a 0.3 in the data in relation to XG: we haven’t even conceded a chance but lost the game. So that’s the way it has been at the minute. [They have been] very tight games and that can change quickly. You just have to be ruthless in front of goal, we have to be better with our level of creativity in front of goal. There will be freshness and fresh impetus in our forward line going into the game tomorrow for sure.”

There will be freshness everywhere, as Kenny is promising sweeping changes to the personnel if not the system. John Egan is injured, with Dara O’Shea likely to replace him. Nathan Collins is undroppable and so too is Shane Duffy. Though these have been his first games since March, it’s arguably a greater risk to remove Duffy, who remarkably remains Ireland’s biggest goal threat. (No Irish player took more touches in the Ukraine penalty area than Duffy.)

Seamus Coleman is out of the remaining two games with injury and the sense is that Cyrus Christie did little to justify his place in midweek, so Alan Browne may be an option in his stead. James McClean will surely replace the flagging Enda Stevens on the opposite flank. There will be changes in midfield too: Jeff Hendrick may earn a break, with Conor Hourihane best-placed to replace him. 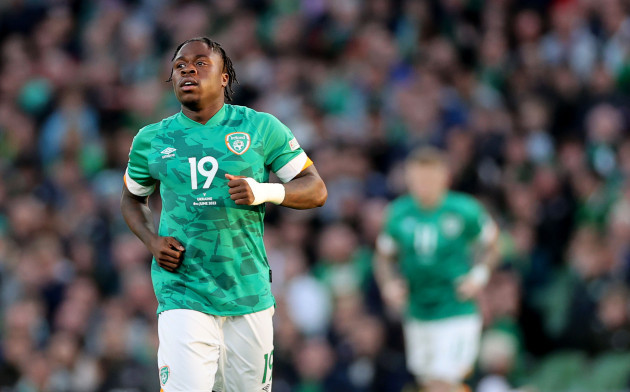 Michael Obafemi will start if he is deemed fit enough to play a second game in four days, but his history of hamstring injuries means that cannot be assumed. There will be hope that Jason Knight is fit to go again but he did much more running than was bargained for against Ukraine.

Scotland are the second successive side to arrive in Dublin in the wake of a World Cup play-off loss, though they have had the balm of a Nations League win over Armenia in the interim.

Steve Clarke alighted on a back-three system as the canniest way to fit both Andy Robertson and Kieran Tierney into the same side, and has stuck with it in spite of Tierney’s injury absence. It didn’t serve them well in their comfortable loss to Ukraine a week ago but it may suit them against Ireland, a side who often struggle against those who match them up shape-wise. Since Ireland assumed the formation at the start of 2021, they have played five games at home to sides playing with three centre-backs, and beaten only Qatar in a friendly.

Leeds captain Liam Cooper and back-up goalkeeper  Zander Clarke have dropped out of the squad to get married, but Clarke has many of his most recognisable names available.

“Scotland played well against Armenia”, said Kenny. “To be fair, we were unbeaten in eight before last week and they were also unbeaten in eight. They probably had more significant wins that we’ve had and have been together longer and qualified for the European Championships and have a lot of players playing at the top end of the Premier League. They have a very experienced squad.”

The numbers make his point. Even without Tierney, Scotland’s squad for this game totalled 16,291 minutes of action in the Premier League last season. The Irish squad, now missing Coleman and Matt Doherty, accumulated a measly 3,353 minutes by comparison.

Get closer to the stories that matter with exclusive analysis, insight and debate in The42 Membership.

“From our point of view, that doesn’t matter. We have a full house, this is our home, the Aviva Stadium and we want to perform and play to the best of our ability and give them something to be proud of.”

But here we are again, looking beyond the intangibles of passion and pride, and edging closer back to a claustrophobic world in which the manager simply needs a good result.

As for when we were last in that position, it doesn’t seem so long ago.