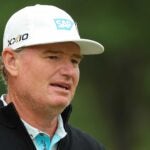 Ernie Els was inducted into the World Golf Hall of Fame in 2010.

Ernie Els understands the temptation of LIV Golf, especially for players of a certain age.

Heck, he was there himself just a few years ago.

“From 45 to 50, you’re nowhere,” Els, who is now 52, said the other day as he looked out on to the range at Liberty National Golf Club, in New Jersey. “You’re not the player you used to be. You can’t compete. It’s an awkward time.”

Els, who is a sporting legend in his homeland of South Africa thanks to his 70-plus wins worldwide, including four major-championship titles, was pondering the decision that some of his fellow professionals have made to, in effect, cut ties with the PGA and DP World tours in return for huge paydays from LIV Golf.

Some of those notable LIV commits — Bryson DeChambeau, 28; Talor Gooch, 30; Abraham Ancer, 31 — are still in their primes. But considerably more — Phil Mickelson, 52; Lee Westwood, 49; Pat Perez, 46; Ian Poulter, 46; Graeme McDowell, 42; Sergio Garcia, 42 — are at stages in their careers where competing for paychecks against, in many cases, players half their age has become a daunting proposition.

So, when an upstart league comes along with nine-figure signing bonuses and no-cut events with $25 million purses, the pull is strong, no matter the source of the payouts, which, in this case, happens to be a government with an abysmal human-rights record. (Even avowed PGA Tour lifer Rory McIlroy acknowledged the lure earlier this week, saying, “I understand why guys went, especially the guys that are sort of in the latter stages of their career and if I was in their position, I’d serious have to think about doing the same thing.”)

Among the other LIV signees are three of Els’ countrymen: Branden Grace, 34; Louis Oosthuizen, 39; and Charl Schwartzel, 37, who won the debut LIV event, in London, last month. Els said none of those players consulted with him before they contracted with LIV — “they are too shy to speak to me,” he said — but he has thought about what he would have told them.

“I would have said, ‘You’ve got to think about it,” Els said. “I understand that the guys go because of the money — it’s just a ridiculous amount — and you get to a certain point in your career, you have to consider it. But—”

And this is a big but for Els.

“—it’s not golf as we know it anymore. It’s a very different product.”

Much of LIV, of course, looks exactly like golf as we know it. Clubs and balls. Birdies and bogeys. Fairways and flagsticks. But that’s not what Els was driving at. It’s LIV’s format that he can’t get past: the absence of the pure meritocracy — beat half the field or go home with nothing — that is an inherent and integral part of virtually every other major tour.

“If it was a 72-hole system, then you’d have to look at it,” Els said. “But it’s 54 holes, no cut, shotgun start. It feels like it’s silly season golf.” Els said he would be fine with the major tours coming together during the off-season to play an unconventional style of golf like LIV has conceived, but he can’t get his head around LIV’s everybody-gets-a-trophy format as a credible way to test and identify the best golfers in the world.

“Go play this kind of format for three or four months and have your fun,” he said. “But then go play real golf after that. That’s how I feel it probably should have gone down but it didn’t.”

If a rival tour was signing players then, would Els have jumped ship for guaranteed money?

“I would have been against it,” he said. “You’d have to look at it, yes, but I’ve got really great sponsors. I’ve got really great people supporting me. We have our autism endeavor. Lots of things are in play for me. In my case, it’s not just take the money and see ya later. There [would be] a lot of consequences.”

That, and a nagging sensation in his gut.

As GOLF.com’s executive editor, Bastable is responsible for the editorial direction and voice of one of the game’s most respected and highly trafficked news and service sites. He wears many hats — editing, writing, ideating, developing, daydreaming of one day breaking 80 — and feels privileged to work with such an insanely talented and hardworking group of writers, editors and producers. Before grabbing the reins at GOLF.com, he was the features editor at GOLF Magazine. A graduate of the University of Richmond and the Columbia School of Journalism, he lives in New Jersey with his wife and foursome of kids.