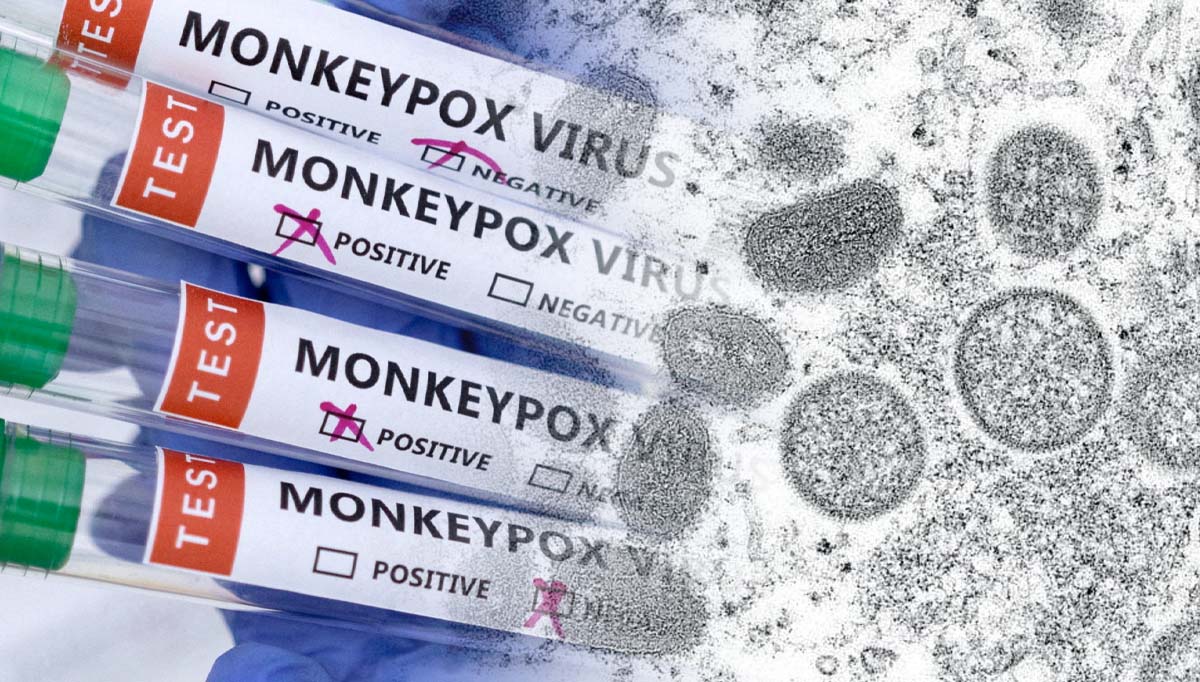 MANILA, Philippines—Monkeypox, a rare disease caused by the monkeypox virus, is not new as it has been known to be a type of viral infection common in West and Central Africa.

However, with the recent rise in cases reported in non-endemic countries—countries where the virus has not been detected before or was not constantly present—more questions have been raised about the disease.

As monkeypox continues to spread in several countries across the globe, many claims—mostly misconceptions and false information—have also spread regarding the disease and the virus that causes it.

In this article, INQUIRER.net—citing experts in the field—will debunk some misconceptions and misinformation about the disease and detail the procedures and measures that the government could impose once monkeypox has been detected in the Philippines.

No definite source yet

One of the main misconceptions about monkeypox is that it originated from monkeys.

However, according to epidemiologist Dr. Enrique Tayag, the disease’s “natural history remains unclear.”

“There is reference to an enzootic cycle that involved humans, non-human primates, and squirrels,” said Tayag at an online forum hosted by the University of the Philippines (UP), UP Manila NIH National Telehealth Center, and UP Philippine General Hospital (PGH).

According to United States Centers for Disease Control and Prevention (US CDC), monkeypox was first discovered in 1958 when two outbreaks of a pox-like disease were observed in colonies of monkeys being kept for research, “hence the name.” 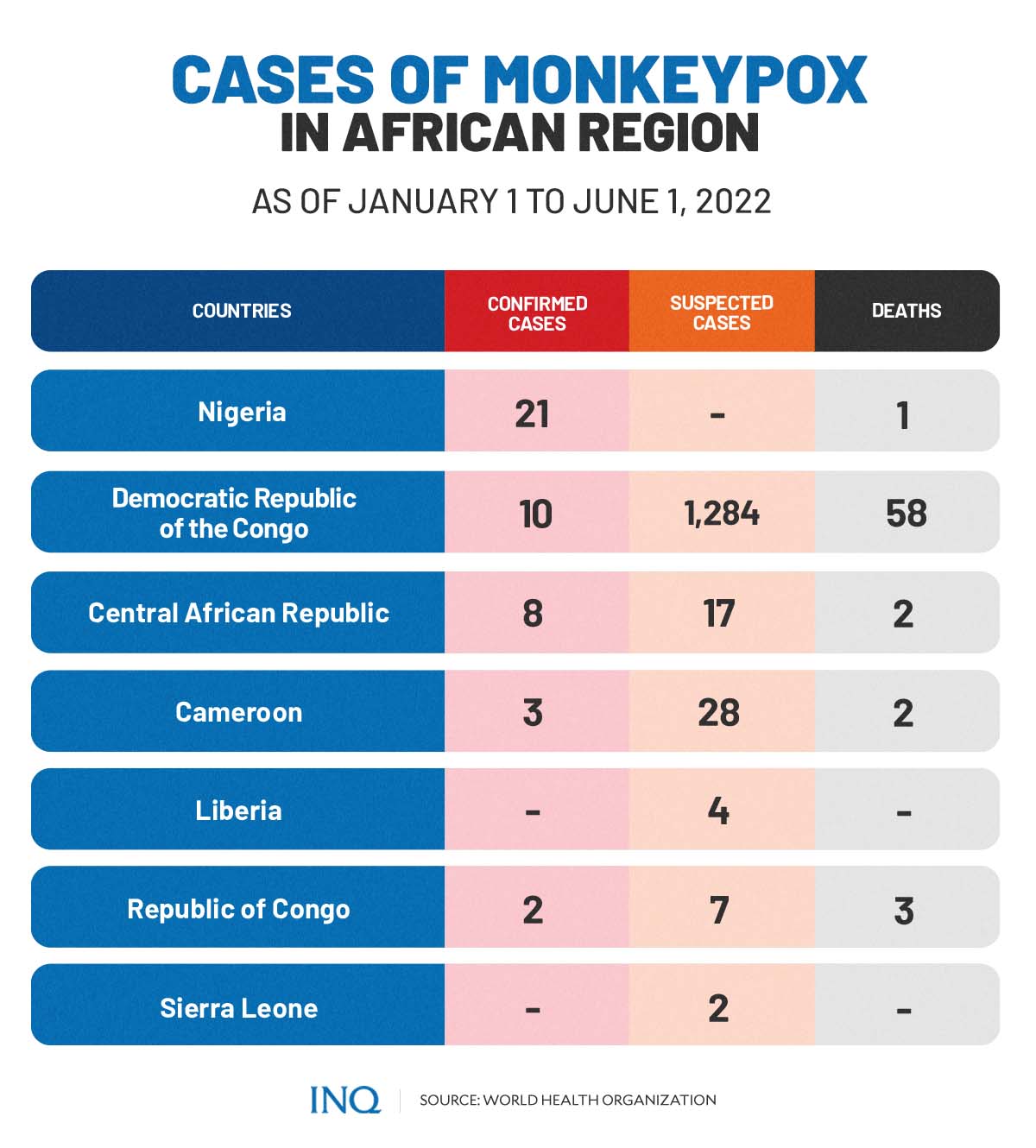 The first recorded human case of monkeypox was in 1970 in the Democratic Republic of the Congo (DRC) in a nine-year-old boy in a region where smallpox had been eliminated in 1968.

“With the eradication of smallpox in 1980 and subsequent cessation of smallpox vaccination, monkeypox has emerged as the most important orthopoxvirus for public health,” said World Health Organization (WHO).

READ: Monkeypox: What to know amid unusual rise in cases

In terms of monkeypox’s origin, or how the currently increasing cases in several countries began, researchers and experts noted that sequenced viral genomes and thorough epidemiological investigation might point out that the recent cases in non-endemic countries all link back to a single case.

“The current sequences are most similar to those from a smattering of monkeypox cases that arose outside Africa in 2018 and 2019 that were linked to travel in West Africa,” an article published in Nature—a monthly peer-reviewed medical journal—read, citing Bernie Moss.

Moss is a virologist at the National Institute of Allergy and Infectious Diseases in Bethesda, Maryland.

“The simplest explanation is that the person who had the first non-African case this year — who has still not been identified — became infected through contact with an animal or human carrying the virus while visiting a similar part of Africa,” the article stated.

Virologist Gustavo Palacios from the Icahn School of Medicine at Mount Sinai in New York City said other explanations for how the current cases began cannot be ruled out.

He explained that the monkeypox virus could have already circulated outside Africa in humans or animals but was undetected.

“The sudden and unexpected appearance of monkeypox simultaneously in several non-endemic countries suggests that there might have been undetected transmission for some unknown duration of time followed by recent amplifier events,” WHO said.

However, some experts believe this hypothesis might be less likely because monkeypox usually causes visible lesions on people’s bodies.

Outbreaks recorded but not yet ‘pandemic’

The current increase in reported cases of monkeypox in several countries outside Africa is being considered an outbreak.

“A single confirmed case in a country where monkeypox is not endemic is already considered an outbreak,” Tayag explained.

As of June 2, WHO has so far received 780 laboratory-confirmed cases of monkeypox from 27 countries that are not endemic to the monkeypox virus.

These reported cases of monkeypox were located in the following countries outside central and west Africa, including countries in the Region of the Americas (AMRO), Eastern Mediterranean Regional Office (EMRO), European Region (EURO), and Western Pacific Region (WPR):

Between January 1 and June 2022, a total of 1,408 suspected and 44 confirmed cases of monkeypox—including 66 deaths—have been recorded in some of these endemic countries, specifically:

“The situation is evolving and WHO expects that there will be more cases of monkeypox identified as the outbreak progresses and as surveillance expands in both endemic and non-endemic countries,” WHO said.

Despite the high number of confirmed and reported cases of monkeypox in non-endemic countries, the WHO director-general has not yet declared the current monkeypox outbreak a Public Health Emergency of International Concern (PHEIC).

The WHO also said that the monkeypox outbreak is unlikely to lead to a pandemic.

“We don’t know, but we don’t think so,” said Rosamund Lewis, technical lead for monkeypox from the WHO Health Emergencies Programme, when asked whether the current outbreak has the potential to grow into a pandemic.

“At the moment, we are not concerned of a global pandemic,” she said.

READ: Monkeypox outbreak not likely to lead to pandemic – WHO

Tayag explained that a disease outbreak is considered a pandemic when it spreads across continents.

“Usually, [a disease outbreak] is called a pandemic if multi-continents are already involved,” he said.

“[The current monkeypox outbreak] shows that at the most, [cases are] only in two continents,” he added.

For now, WHO said it assesses the risk of monkeypox at the global level as moderate, “considering this is the first time that many monkeypox cases and clusters are reported concurrently in non-endemic and endemic countries in widely disparate WHO geographical areas.”

So far, the Department of Health (DOH) has yet to report a case of monkeypox in the Philippines.

READ: DOH heightens monitoring of monkeypox to keep it out

Tayag, however, reminded that once an individual with monkeypox has entered the country, it will already be considered an outbreak. In this scenario, he said there will be procedures and measures which will be imposed by the government to prevent the spread of the disease.

One of the main focuses, according to him, will be on the country’s point of entry.

“The Bureau of Quarantine (BOQ) has the responsibility to give instructions to incoming travelers [of] what they have to watch out for that they have to report and notify,” said Tayag.

These include signs and symptoms of monkeypox, which the WHO said typically include fever, intense headache, muscle aches, back pain, low energy, swollen lymph nodes, and a skin rash or lesions.

The rash or lesions—which can be flat or slightly raised, filled with clear or yellowish fluid, and can crust, dry up, and fall off—usually appears within one to three days of the start of a fever.

On May 24, the health department’s Technical Advisory Group on infectious diseases said the government is not yet inclined to recommend a ban on travelers from countries with confirmed cases of monkeypox.

“We should not impose a travel ban yet. With regards to isolation and quarantine protocols, [it] is done for suspected cases…. We just monitor [any] one suspected to be exposed [to monkeypox] and then we isolate if there are symptoms,” said Dr. Marissa Alejandria.

Director Beverly Ho, of the Disease Prevention and Control Bureau, explained that a “four-door strategy” would be implemented should cases of monkeypox be detected in the country.

This strategy includes strict border controls as a “primary level of defense” and screening, testing, and quarantine of travelers with monkeypox-like symptoms. International travelers will also be required to register through the BOQ’s onehealthpass.com.ph, 48 hours before departure from the country of origin.

READ: No ban yet on travelers from countries with monkeypox

Based on DOH Department Memorandum 2022-0220 Interim Technical Guidelines for the Implementation of Monkeypox Surveillance Screening, Management, and Infection Control, the health department said during the activation of Doors 1 and 2 of the “4-Door Alert System,” the Research Institute for Tropical Medicine (RITM) will be designated as the main isolation facility for suspect, probable, and confirmed monkeypox cases.

Once a case has been confirmed, Tayag said it will be reported immediately to WHO and a risk assessment will be done to identify whether it will constitute PHEIC.

“The protocol now is, if you are within three rows from a passenger who is a confirmed case, then you will be included in the list of contacts.”

Last month, Dr. Rontgene Solante, chief of the Adult Infectious Diseases and Tropical Medicine Unit at the government-run San Lazaro Hospital, said in an interview that travelers from countries with monkeypox cases—especially those who are manifesting symptoms—should be isolated to prevent the spread of the disease.

“That’s why it’s a must for tourists and Filipinos entering the country from countries with reported cases to be monitored also. They have to be advised if they are manifesting symptoms and they have to be isolated and this should be immediately reported to a doctor or to the Department of Health,” said Solante.

“Before they travel, they have to see if they are feeling any symptoms. However, if for example, the virus is incubating during the travel, we can see the symptoms upon entry and it’s important they also have to be isolated,” he added.

According to Dr. Merrill Van Yu, adult infectious disease fellow at UP PGH, the ideal duration of quarantine for an individual, who has been exposed to someone who has monkeypox and later on developed symptoms and contracted the disease, is 21 days.

“There have been accommodations by the CDC, as well as WHO, that if you remain asymptomatic initially after the exposure, maybe you may not need to isolate or quarantine,” said Yu during the same online forum hosted by UP, UP Manila NIH National Telehealth Center, and UP PGH.

“However, this is still an ongoing issue. So as we study more about the monkeypox and its trend, I think the agencies will be able to give a more structured quarantine plan later on,” he said.

The incubation period—the interval from infection to onset of symptoms—of monkeypox is usually 6-13 days, according to WHO and US CDC. However, it can range from 5 to 21 days.

Dr. Joseph Adrian Buensalido, a clinical associate professor at the UP PGH, clarified that the health department’s memo on monkeypox did not actually use the term quarantine.

The quarantine procedures, according to Tayag, will be determined by the existing guidelines issued by the DOH. However, he said that they anticipate that procedures “will change over time.”

“The consensus right now from many countries is that you don’t have to be quarantined in which you are actually not going out of your home, especially if it’s just an exposure,” he said.

Still, an individual who has been exposed to someone who contracted the disease should do active or direct monitoring. They are also instructed to report any signs or symptoms by contacting the DOH hotline at 1555 or through local health authorities or barangay emergency response teams if they are trained.

“The main thing about this quarantine and isolation is that we quarantine the exposed, we isolate those with the illness or signs and symptoms already,” said Tayag.

“What’s different [between quarantine and isolation protocols for COVID-19 and monkeypox] is that [for monkeypox], you don’t have to stay at home. Quarantine doesn’t mean stay at home,” he said.

“Quarantine actually means monitoring signs and symptoms and as much as possible prevent further transmission,” he added.

There are several preventive measures that can be taken to against infection of monkeypox virus, such as:

Don’t miss out on the latest news and information.