NCT DREAM achieved a triple crown on the Gaon charts after topping three separate charts for the week of May 29 to June 4. The group’s new repackaged album “Beatbox” debuted at No. 1 on the weekly physical album chart, while their title track “Beatbox” swept the No. 1 spot on both the overall digital chart and the digital download chart this week.

SEVENTEEN’s latest studio album “Face the Sun” claimed the next two spots on the physical album chart, with the regular version of the album staying strong at No. 2 and the Weverse version charting separately at No. 3. 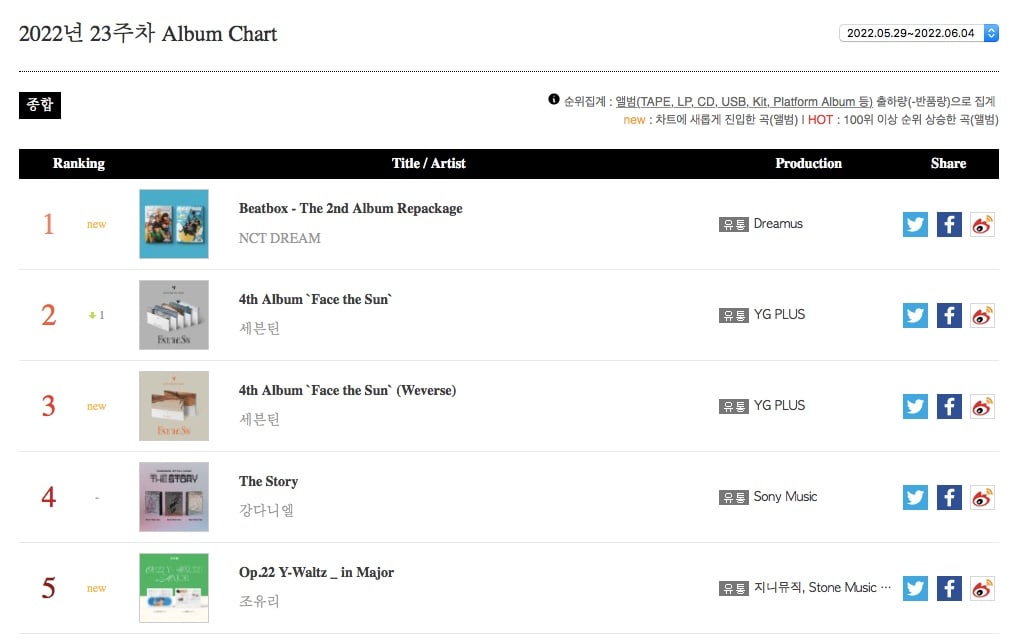 SEVENTEEN topped the physical album chart for May with “Face the Sun,” which debuted at No. 1 on the monthly chart.

NCT DREAM’s new repackaged album “Beatbox” made an impressive debut at No. 4, despite having been released on May 30—the day before the end of the month. 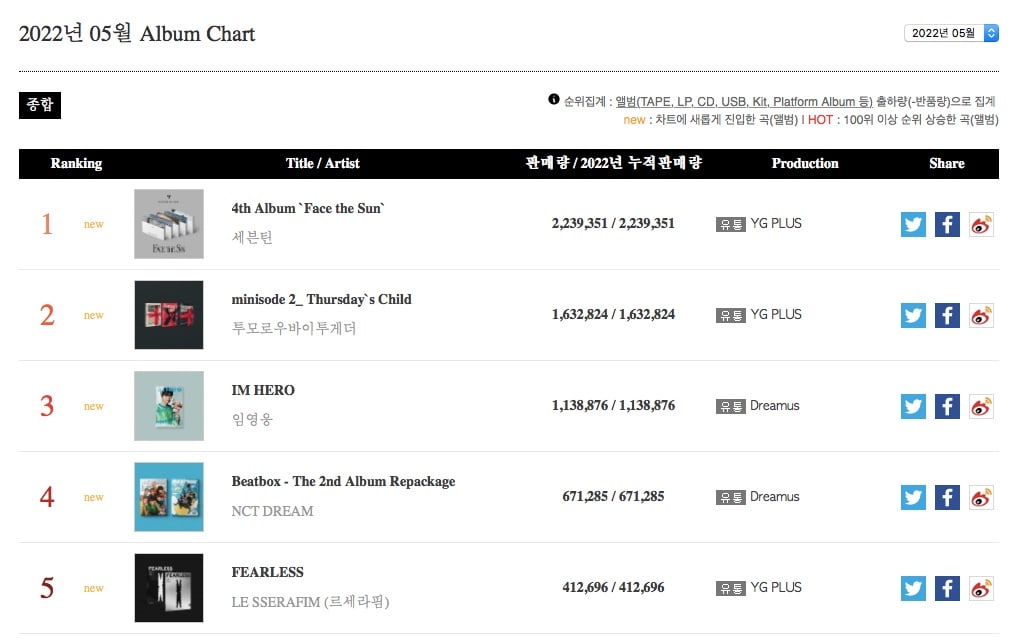 NCT DREAM’s new title track “Beatbox” debuted at No. 1 on this week’s overall digital chart, while PSY and BTS’ Suga’s hit collab “That That” stayed strong at No. 2.

(G)I-DLE’s “TOMBOY” and IVE’s “LOVE DIVE” maintained their respective positions at No. 3 and No. 4, followed by MeloMance’s “Love, Maybe” (from the OST of “A Business Proposal”) at No. 5. 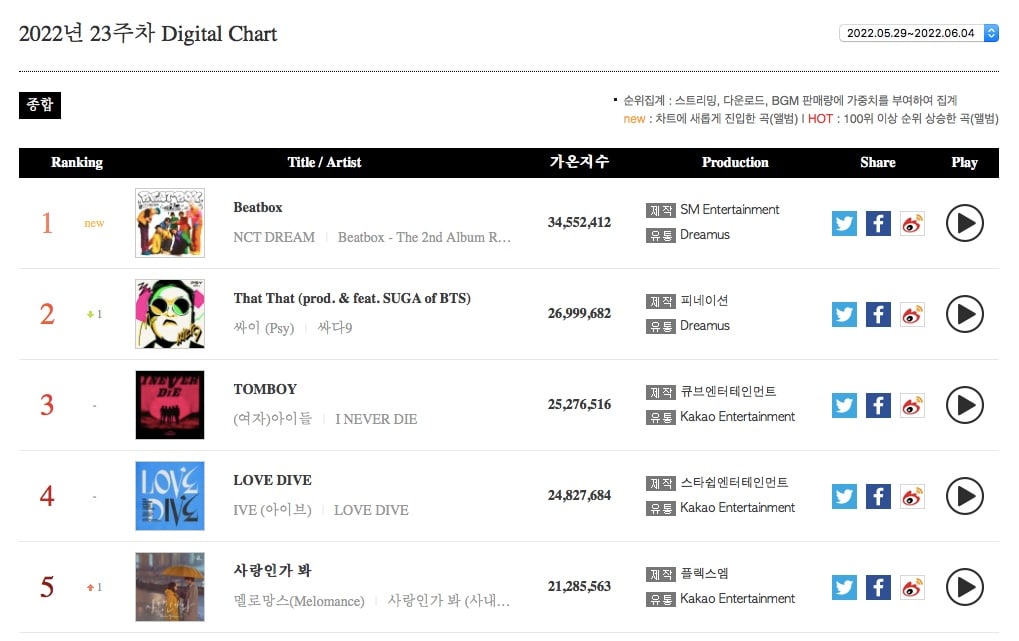 PSY and Suga achieved a double crown for May, topping both the overall digital chart and the streaming chart with their smash hit “That That.” 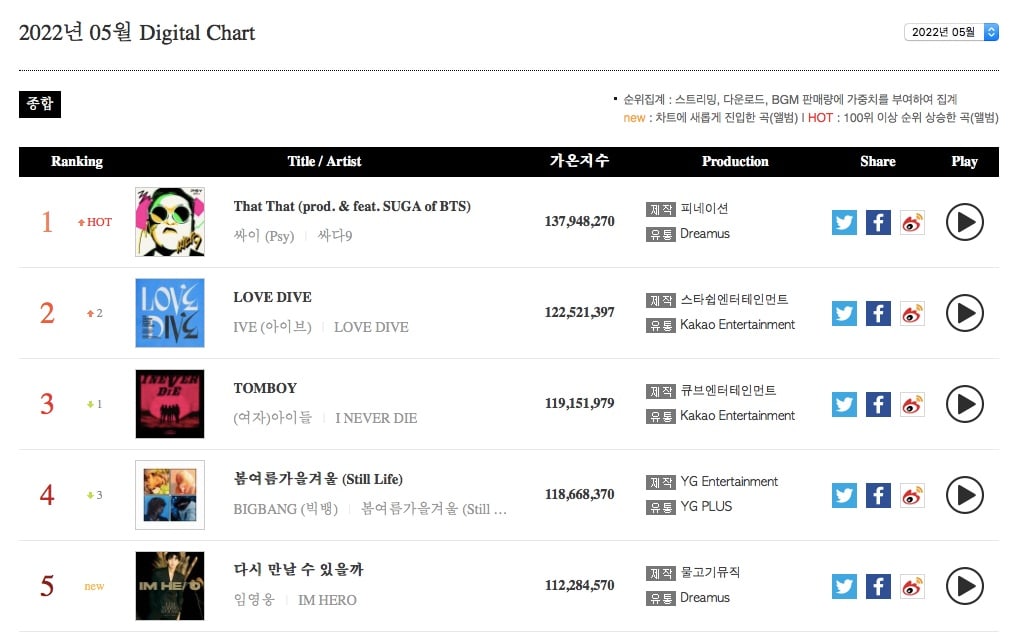 NCT DREAM’s “Beatbox” entered the digital download chart at No. 1, while SEVENTEEN’s latest title track “HOT” and Lim Young Woong’s “If We Ever Meet Again” held onto their respective spots at No. 2 and No. 3.

Kang Daniel’s new title track “Upside Down” stayed strong at No. 4, and PSY’s “That That” (produced by and featuring Suga) rounded out the top five for the week. 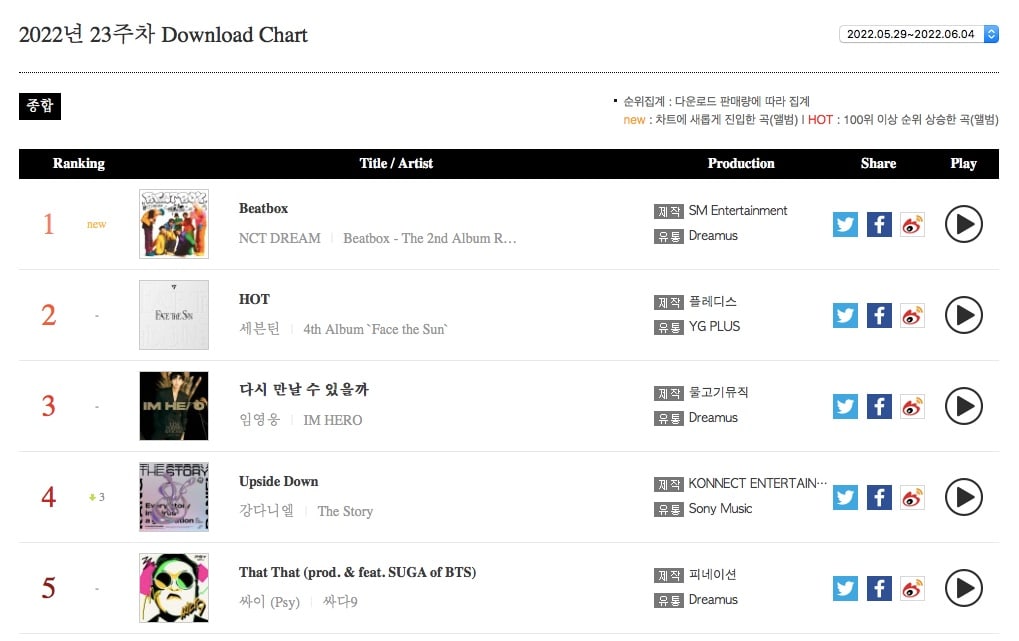 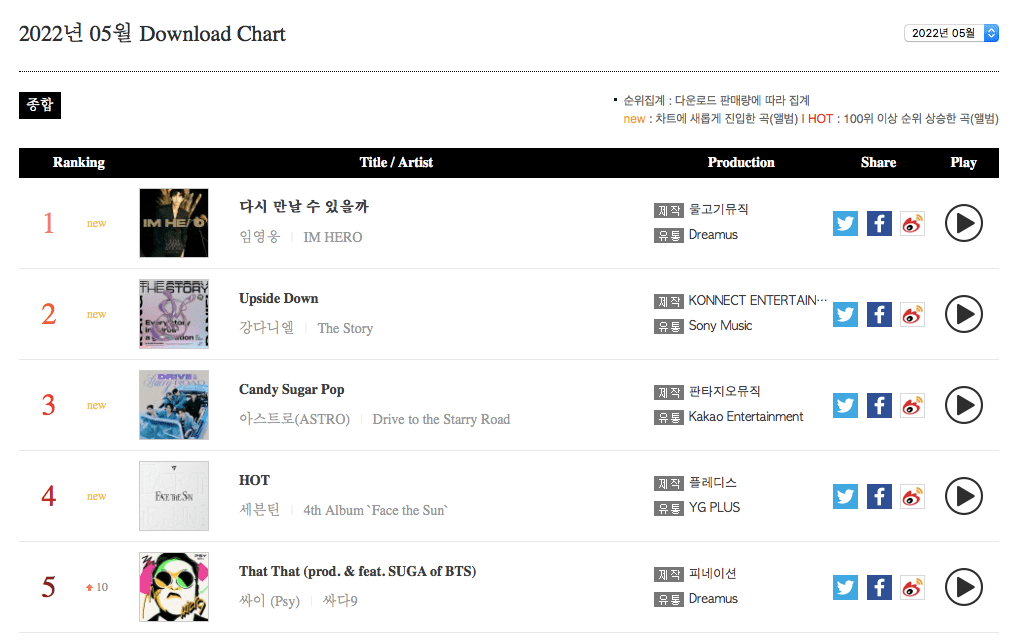 MeloMance’s “Love, Maybe” climbed to No. 4 for the week, while BIGBANG’s “Still Life” followed at No. 5. 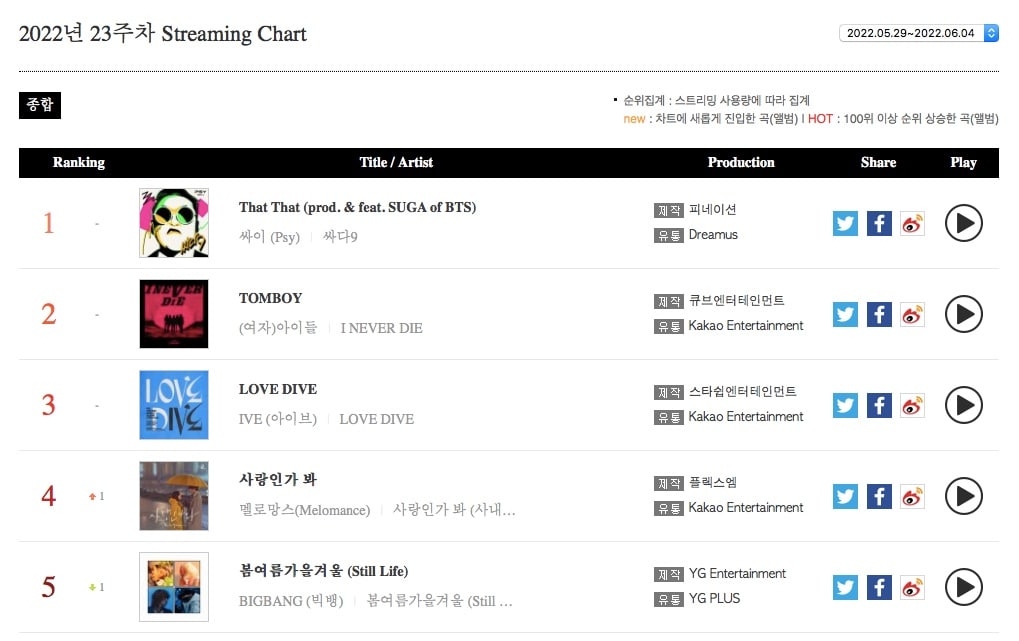 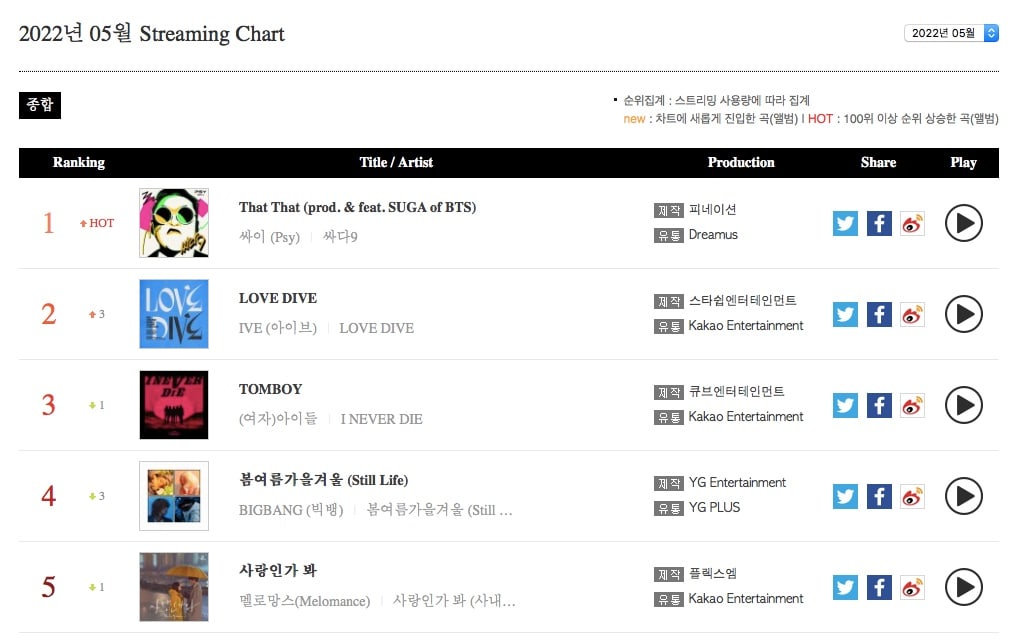 The top five artists on this week’s social chart were exactly the same as last week: BTS continued their reign at No. 1, followed by BLACKPINK at No. 2, BLACKPINK’s Lisa at No. 3, Jessi at No. 4, and Lim Young Woong at No. 5. 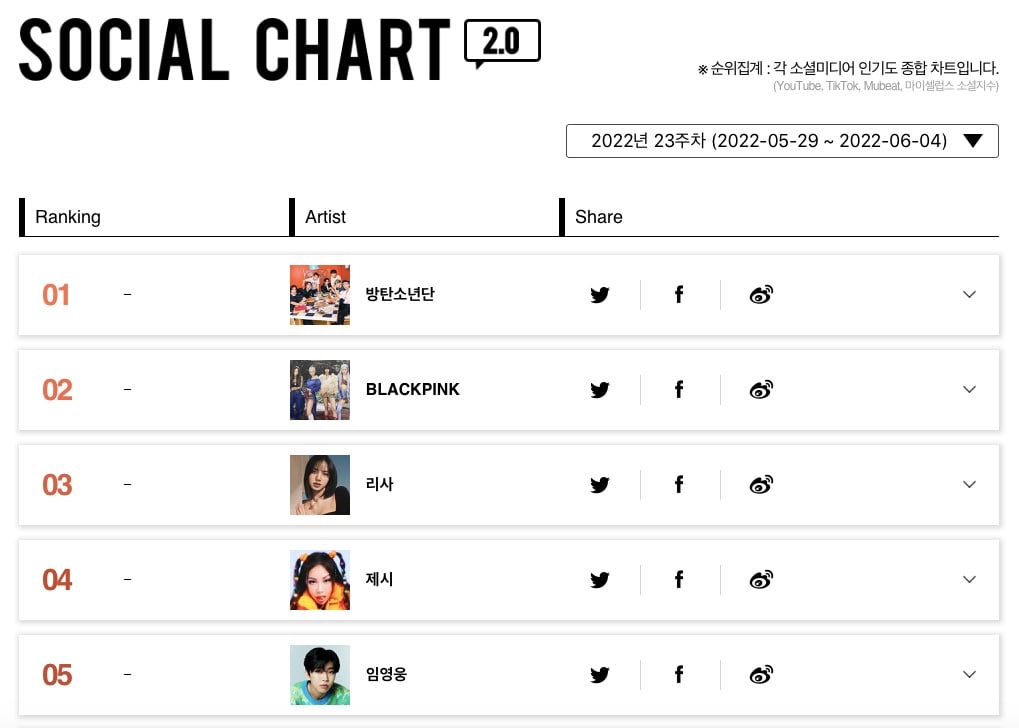 The top four artists on the social chart for May were the same as the weekly social chart: BTS charted at No. 1, BLACKPINK at No. 2, Lisa at No. 3, and Jessi at No. 4.

Finally, TREASURE rounded out the top five for the month. 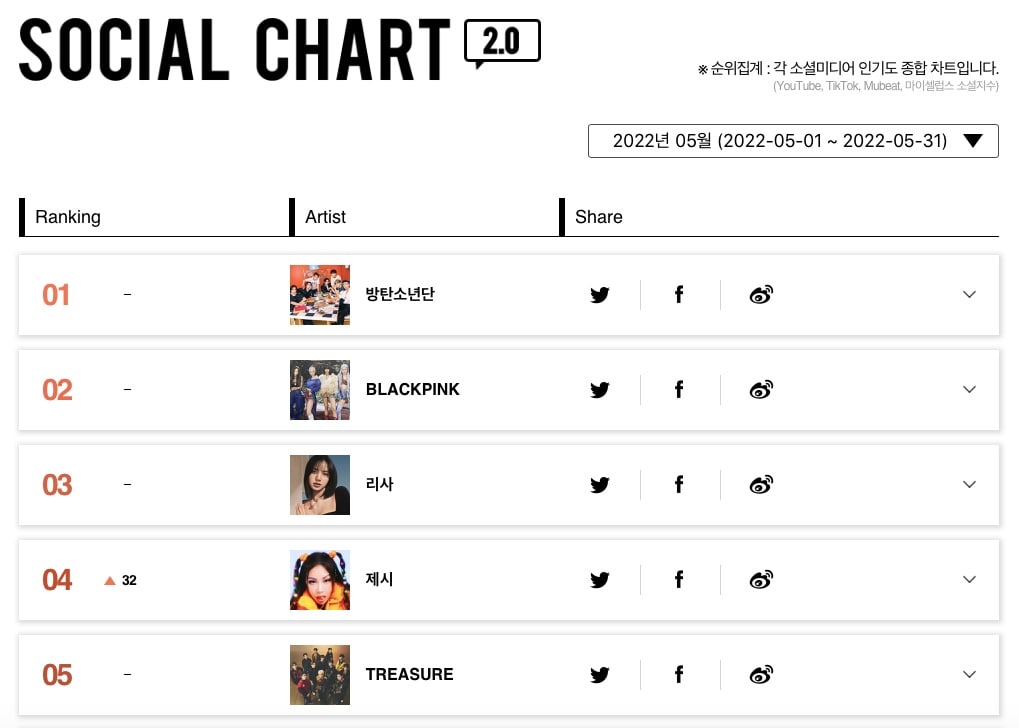 Congratulations to all of the artists!

How does this article make you feel?