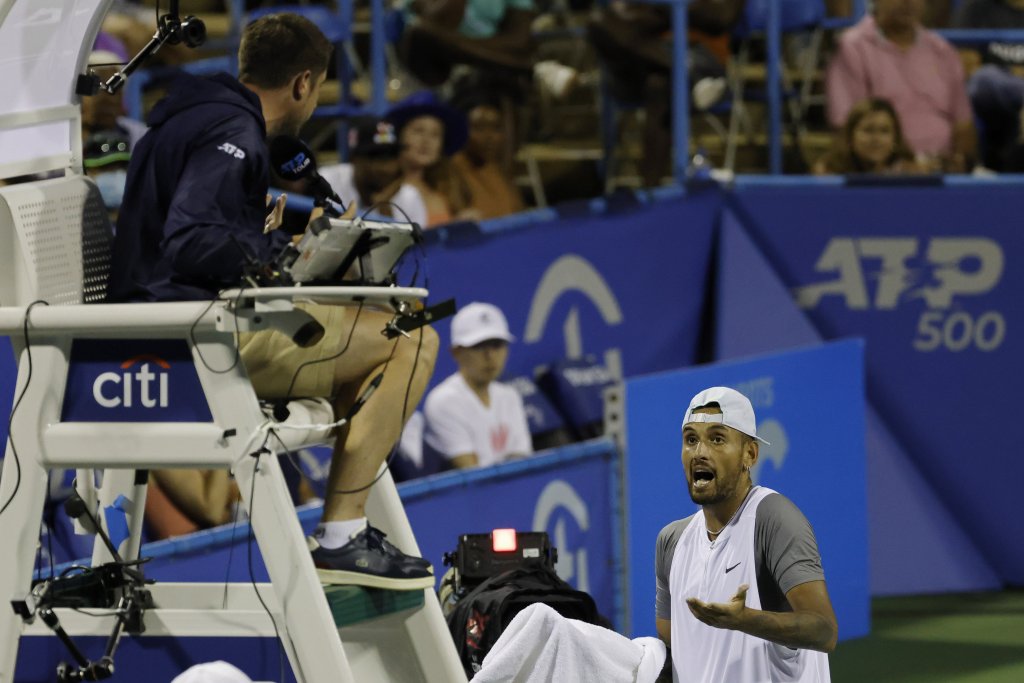 Men’s tennis always seems to take on an extra dimension when the talented but mercurial Nick Kyrgios is feeling it.

And this week at the Citi Open, the Aussie has been in engaged and dominant form.

Odds as of Aug. 6 at Barstool Sportsbook

But, as always with Kyrgios, there will come a tipping point, where the competitive fire explodes and things get a little ugly.

That happened late Friday night against his pal Frances Tiafoe. But unlike other occasions in the past, Kyrgios still pulled out the match.

And, at -182, Kyrgios remains the outright favorite to win the tournament.

If you’re new to betting on tennis, why not have a look at our Tips for Beginners page.

After Midnight, Kyrgios Lets it All Hang Out

Kyrgios was remarkably efficient in getting to the Citi Open quarters. He needed less than an hour to beat Marcos Giron in the first round, and got past the speedy Tommy Paul (another good pal) and huge-serving Reilly Opelka nearly as efficiently, averaging just an hour and 17 minutes during those three matches.

But against Tiafoe, after both had to finish suspended third-round matches earlier in the day and wait out a rain delay, the sparks flew in a first-ever meeting. Even if it began in congenial fashion.

Kyrgios (as often happens when he’s fatigued), railed against fans chirping at him in the stands. He harangued Renaud Lichtenstein to the point where the chair umpire gave him a rarely-seen dressing down in the middle of the match.

Kyrgios “She’s drunk off her face in the first row. Get her out.”

Lichtenstein “Point her out.”

Kyrgios “She’s the lady in the dress that looks like she’s had 700 drinks bro.”

On Friday, Kyrgios also infuriated the normally cheery Tiafoe, who had his own issues with Lichtenstein, feeling the umpire had been far too lenient in applying the rules against Kyrgios’s behaviour.

It was an entertaining match, big on flashy shotmaking and with an impressive winners-to-unforced-errors ratio for both.

Long Hours on Court for Ymer

Last weekend, Ymer withdrew from the doubles qualifying, citing a bad back. Perhaps he had an inkling of the marathons he would play in singles.

The 23-year-old Swede has played four three-setters, although never two in one day. He has spent a total of 10 hours and 44 minutes on court in dispatching Andy Murray, Aslan Karatsev, Emil Ruusuvuori and, on Friday night, Sebastian Korda.

Every single one of those wins was against an opponent ranked far higher, against whom he was the decided underdog.

Ymer, whose career-high ranking of No. 67 came the week tennis shut down because of the pandemic in March, 2020, has never quite gotten his mojo back since then.

DraftKings Promo Code: Bet $5 on MLB This August and Get $100 Instantly!

He hadn’t won back-to-back matches since the French Open. And he’d had eight first-round exits at ATP-level events (in the main draw or qualifying) since making the semifinals in Montpellier back in early February.

Unlike the expressive Tiafoe, Ymer will give Kyrgios absolutely nothing to feed off when they meet Saturday.

So Kyrgios will have to create his own drama. Or, because he still has a quarterfinal doubles match to play later in the evening (and possiibly, two more on Sunday along with a singles final), he might go into efficiency mode.

Ymer has never played Kyrgios before. You can know what you’re in for; it’s a completely different deal to experience it. Purely by force of personality – not to mention his blinding shotmaking – Kyrgios should get through this one routinely.

Unless something happens, of course.

Stephanie gets the straight dope from the tennis insiders. On court, she has represented her country internationally. A BA in journalism led to years on the MLB beat and a decade covering tennis globally. She’s written for Postmedia, the Guardian, the New York Times and also publishes OpenCourt.ca.

Stephanie gets the straight dope from the tennis insiders. On court, she has represented her country internationally. A BA in journalism led to years on the MLB beat and a decade covering tennis globally. She’s written for Postmedia, the Guardian, the New York Times and also publishes OpenCourt.ca.