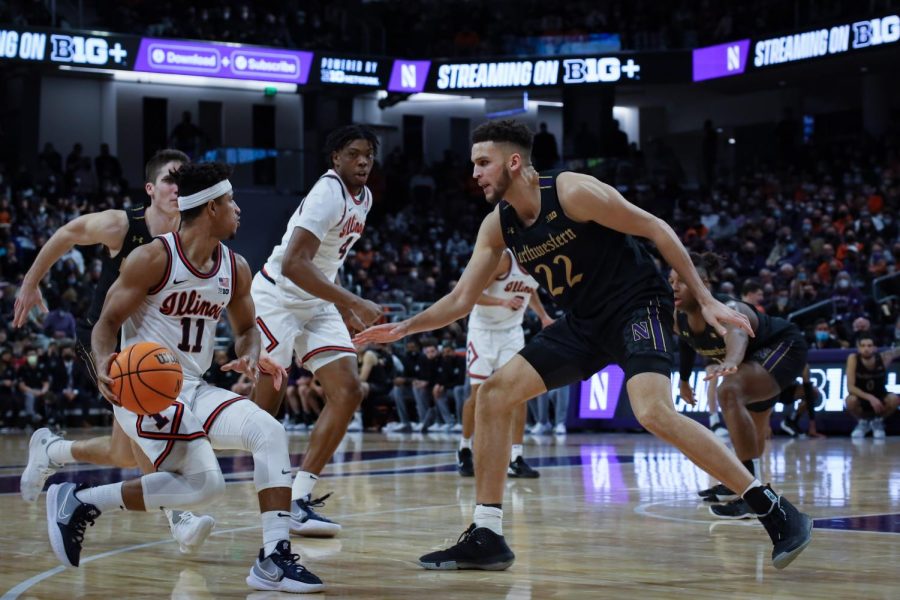 Northwestern forward Pete Nance guards Illinois’ Alfonso Plummer. Nance faces a decision between the NBA or a return to college after announcing his entry into the NBA Draft on April 25 and entering the transfer portal just four days later.

On March 10, senior forward Pete Nance walked off the court in purple and white for the last time.

Two months ago, speculation swirled around the future of Nance, one of the greatest players to ever suit up for Northwestern. Was he going to stay for a super senior season in Evanston with his extra year of eligibility due to COVID-19? Was he off to the NBA Draft headed toward a career in professional basketball? Or would he transfer, using his final year at another school?

“I have no plans, no idea about what’s next for me,” Nance said at the postgame press conference after NU’s loss to Iowa in the Big Ten Tournament. “I need to just go home and think about it. Talk about it with my family, coaches and friends. I’m just proud to be a Northwestern Wildcat.”

Those questions have since been answered, at least partially. Nance announced April 25 he would be entering the NBA Draft, while maintaining his collegiate eligibility.

“After talking with family and loved ones, I am excited to announce that I entered the NBA Draft with the pure focus of living out my lifelong dream of being an NBA player,” Nance said in a Twitter announcement. “I am maintaining my college eligibility and utilizing all of the options at my disposal in order to gather as much information as possible during the process.”

Just four days later, Stadium’s Jeff Goodman broke the news that Nance would also enter the transfer portal, with full focus on “putting himself in position to remain in the draft.”

Nance was an All-Big Ten honorable mention for the Wildcats in a conference loaded with frontcourt stars. The 6-foot-10-inch forward’s 3-point shooting, plus his frequent and successful operation in pick-and-rolls, should translate well to the modern game and could entice NBA teams.

Ryan Hammer, a college basketball and NBA Draft analyst, said he has Nance in the 50s or 60s on his draft board as a late second round pick, but could also be worth taking in the early to mid-second round. He said Nance offers good upside as a potential bench scoring piece for a team contending for an NBA title.

“He’s a little older, but he’s really smart, and he has a really intelligent way of using his body,” Hammer said. “But I think there’s a really good role for him as a big, experienced forward scorer.”

“I think a player like Nance could really open the possibilities for a bench unit, his passing, dribbling and screening creating good shots for players that otherwise may not be able to get them,” Pfeifer said.

If he returns to the collegiate ranks, Nance will certainly have a bevy of suitors.

The Athletic’s Sam Vecenie and CJ Moore placed Nance third in their latest ranking of best players still available in the transfer portal.

“It’s ridiculously difficult to be a big that puts up these counting numbers on 50% from the field, more than 40% from three and more than 75% from the line, and he did it against the absolute best frontcourt competition in the country night-after-night,” Vecenie and Moore wrote in the article. “He’s a clear top-five available transfer if he doesn’t go through with the NBA Draft.”

Nance’s journey now splits in two different directions: college or the NBA? He has until June 1 to withdraw from the draft and keep his collegiate eligibility.

Regardless of his decision, Nance remains an all-time great for the Cats, and his departure leaves a void coach Chris Collins will need to fill in what is becoming a prove-it year.