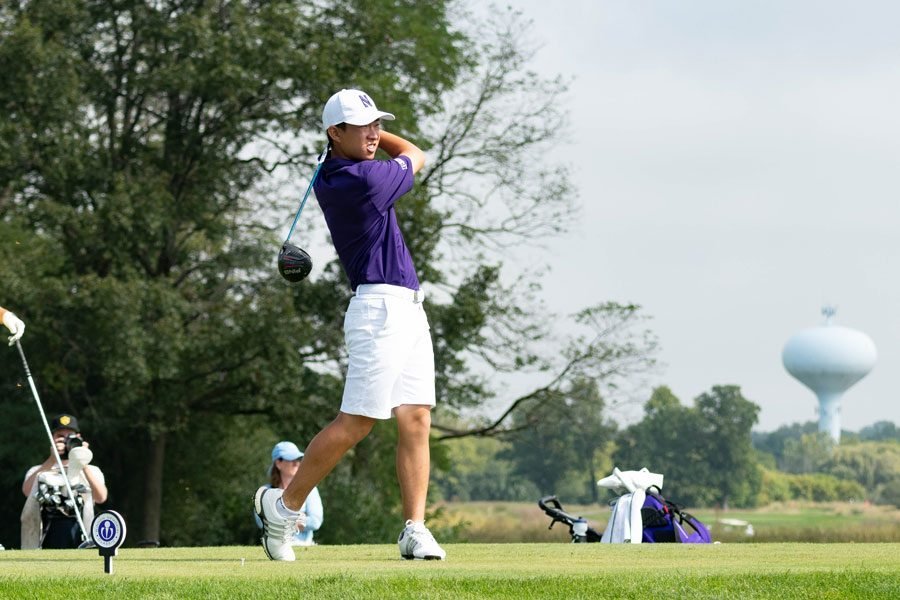 David Nyfjäll swings his club. The senior became the first Wildcat since David Lipsky in 2010 to win the Big Ten Championship, helping NU to a fourth overall finish.

More than a decade after freshman Eric Chun and junior David Lipsky won the individual Big Ten Championship in back-to-back years, another Wildcat has joined the ranks.

Nyfjäll was the only individual of the 68-player field to finish under par, and he helped Northwestern place fourth out of 14 teams. Junior James Imai was the only other NU player to place in the top 30, finishing tied for 21st.

The Cats carded a 26-over 890, just five strokes above tournament champion No. 19 Illinois and three strokes out of third place. With this year’s result, Illinois has won its seventh straight Big Ten Championship.

NU entered the tournament ranked No. 44 nationally, finishing third of the five top-50 ranked teams in the conference.

Following the first round, the Cats found themselves tied in fifth place, relying on strong opening performances from Nyfjäll, who was tied for third individually (-4), and freshman Cameron Adam, who was tied for fifth (-3).

NU’s second round result — though two strokes above the previous round — marked the Cats’ best of the tournament as its five-over 293 moved the team up to fourth.

Nyfjäll followed up his impressive first round with an even-par in the second, advancing to second place individually. Graduate student Eric McIntosh also provided support, hitting one-over, six strokes better than his first round.

The final round witnessed Nyfjäll (+3) ascend to first place after previous-first place holder Adrien Dumont de Chassart hit seven-over to drop to second. Dumont de Chassart, ranked No. 12 in the country, was recently announced as Big Ten Golfer of the Year for the second straight season.

Following the championship, Nyfjäll picked up some honors of his own. The senior was one of five players to be named to the Big Ten All-Championships Team. Additionally, he was unanimously selected for the All-Big Ten first team, an eight-player group representing the best of the conference.

NU turns its focus to the regional rounds of the 2022 NCAA Division I men’s golf championships. During Wednesday’s live selection show on Golf Channel, the Cats were selected to compete in Columbus, Ohio in one of six 54-hole regional tournaments taking place from May 16 through 18.

Seeded No. 8 of 13 teams in its regional, NU hopes to finish within the top five teams to secure a spot in the championship finals, starting May 27.

Last year, following a third place finish at the Big Ten Championship, the Cats did not make it out of the regional rounds, placing ninth in their group.

Though NU’s 2021-22 season will soon come to a close, the team hopes to build on Nyfjäll’s historic performance and make it past the regionals for the first time since 2018.