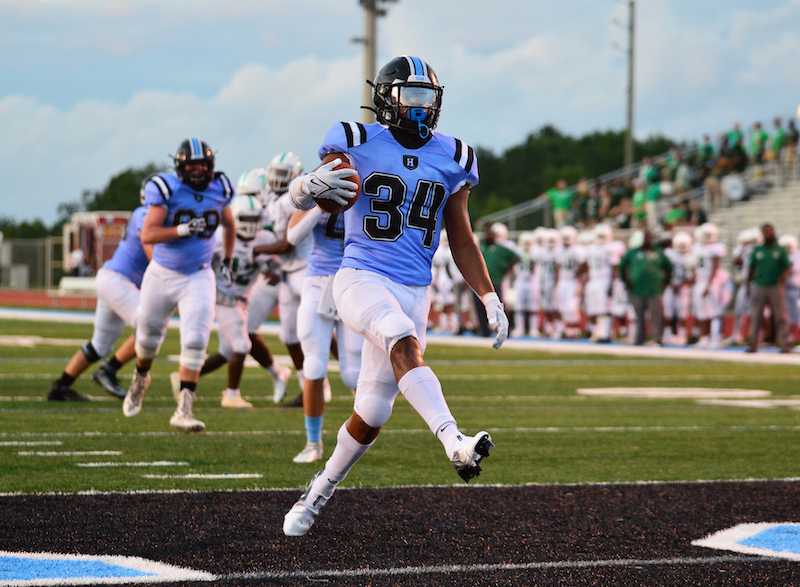 HELENA – The expectations have changed at Helena after two region championships in the last three years, including one a season ago.

Now, as the Huskies enter the 2022 high school football season, they have their eyes on repeating as champs, while also taking the next step in the program—a deep playoff run.

Even with the success the team has displayed on the field the last three years with three consecutive top-two finishes in the region, Helena has never made it past the second round of the playoffs and has been ousted in the opening round during both region championships seasons.

That is plenty of motivation for this year’s team, especially with a more challenging schedule on the horizon.

There will be some key players to replace on both sides of the ball, but going into year five under head coach Richie Busby, the Huskies know what to expect and know what their identity is.

Offensively, they will have to break in a new quarterback with the departure of starter Mac Turner following a 1,437-yard season last year that also featured 11 touchdowns.

He knew how to manage the offense extremely well, but now, the job will be turned over to Dalton Llewellyn or Carson Acker.

Llewllyn is a senior who brings a strong running ability to the table, which could be a benefit with an option-style of offense out of the shotgun, while Acker is more of a pocket passer with a strong arm.

Neither has much experience, but whoever wins the starting job will need to take command of the offense, while they’ll also benefit from help at running back.

Jordan Washington returns for his junior season after setting an impressive mark with 1,606 rushing yards and 26 touchdowns last year.

Just a sophomore putting up those numbers, the expectation has grown going into the new season. Washington isn’t shying away from that pressure, and he will also get help from two other experienced runners with AJ Horstead and Kellen Hughes both returning experience this season.

Horstead and Hughes are similar runners as physical, hard-nosed backs who can help keep Washington fresh.

Along with exciting sophomore Jeremy Sprattling and senior Jax Rush, it is a group that is deep and will benefit from wearing down defenses to help the offense improve as games move along.

With new receivers also needing to step up, that group of runners should help take pressure off of the passing game.

That said, Hunter Hale will be an important returnee at receiver, helping replace the losses of JC Sivley and Kasyn Bustamento.

He has a lot of potential and could be what makes the passing game go this season, while Torrey Ward adds a 6-foot-4 presence to the position as someone who can go up and grab the ball as a sophomore. Sophomore Nathan Jones should also play a role at the position, while Nathan Wade, Caleb Haney, Tripp Bouler and Jarrett Scott are all players who have worked hard and will get opportunities to make a difference.

Many of those players are inexperienced, but they have worked to earn the opportunity, which has created depth the Huskies haven’t had in recent years.

As shiny as all of those stars at the skill positions are, what makes this offense dangerous is the offensive line.

Helena will return three starting offensive linemen to the team this season, which is a scary thought for a team that is already used to wearing teams down in the trenches with the run game.

The returnees include Trace Barnett, Reese Mims and Grant Vines, while veterans Jake Julius, Jackson Thomas and Jacorey Sherman will all be stepping in as starters or rotating players.

Having that strong group back with a running back position that is three deep instantly makes this offense a dangerous threat going into the season. In addition to the run game, however, that allows a new quarterback to feel comfortable.

Defensively, Helena is always dangerous, and while this year’s team will have several leaders to replace, the Huskies have the potential for another impressive season.

The defensive line will be a big area of focus with the departure of both Joel Logan and Connor Pugh.

Those two take more than 160 tackles, 40 tackles for loss and 20 sacks with them, which is a lot of production to replace.

Seniors Xavier Guy and Derrick Wilson, however, are two returning starters who could make a major difference. Both started last year and will be leaned on heavily as starters this season, while Matthew Thompson is another returning senior to a veteran group.

Beyond that, sophomores Jake Quick, Brett Berry and Caden McClure are all exciting young athletes ready to make a difference on the opposite end of the line to Thompson, while they’ll also provide depth.

Closing out the front seven, the linebackers will also take a hit with the loss of Peyton Woodall and Joseph Roberto. Those two combined for more than 200 tackles, including 29 for a loss and 15 sacks.

Typically, it’s a position that the Huskies can replace rather easily each year, but that will be a tall task this season.

Nathan Thomason will be the expected leader at the position as an outside linebacker, while Mason Johnson will play a big role. Eli Ray and Jackson Smith should also be able to fill important roles, while Hughes could play on both sides of the ball as a physical linebacker as well.

While there are questions in the front seven, the secondary will return talent. Senior Walter Womack will be the leader at corner, while sophomore JT Alvis will be an exciting new face. Ray and Kevin Pinkard will split time at safety, while Hale could also help out at a nickel position.

Beyond that, Fletcher Taylor, Desmond James and Cole Mathis are all juniors ready to provide depth.

As for special teams, Austin Lewis will be the lead kicker as a promising sophomore, while Hal Landrum will snap and Haney will hold.

Prediction (7-3): Even with inexperience on both sides of the ball at key positions heading into the season, it’s tough to doubt the Helena Huskies. The schedule sets up nicely for them to not have any back-to-back losses, and they should be able to get off to a strong start, which will be huge for a young group. Plus, this coaching staff has done a tremendous job since stepping foot on campus, and this year’s team seems more built to run the exact style of offense they want to. Expect the trend to continue of this year’s group being able to pound the ball with one of the state’s best backfields, while they’ll capitalize on the pass if defenses try to load the box. Winning close games again will be key in having a chance to finish at 7-3 or better and win the region title, but with the way the team is built and the consistency by which they’ve done that, it’s tough to doubt them.