It has evolved into a vibrant destination surrounded by vast areas of parkland and native bush. Then, of course, there are the historical and cultural finds at Canberra’s fantastic galleries.

That all sounds nice, but the real reason you will want to venture to Canberra is to play a round at The Federal Golf Club, which made a well-deserved return to the nation’s Top-100 Courses ranking at No.93 this year having narrowly missed out in 2020. This is clearly a sign the layout is starting to realise its enormous potential as one of Australia’s best inland courses. It certainly impressed our ranking judge’s panel.

“Since converting its fairways to the hardier Santa Ana couch and addressing some of its water issues, Federal has improved year-in, year-out. Canberra is not an easy place for turf management year-round, but Federal does it really well,” said Top-100 Course judge Graham Brady. 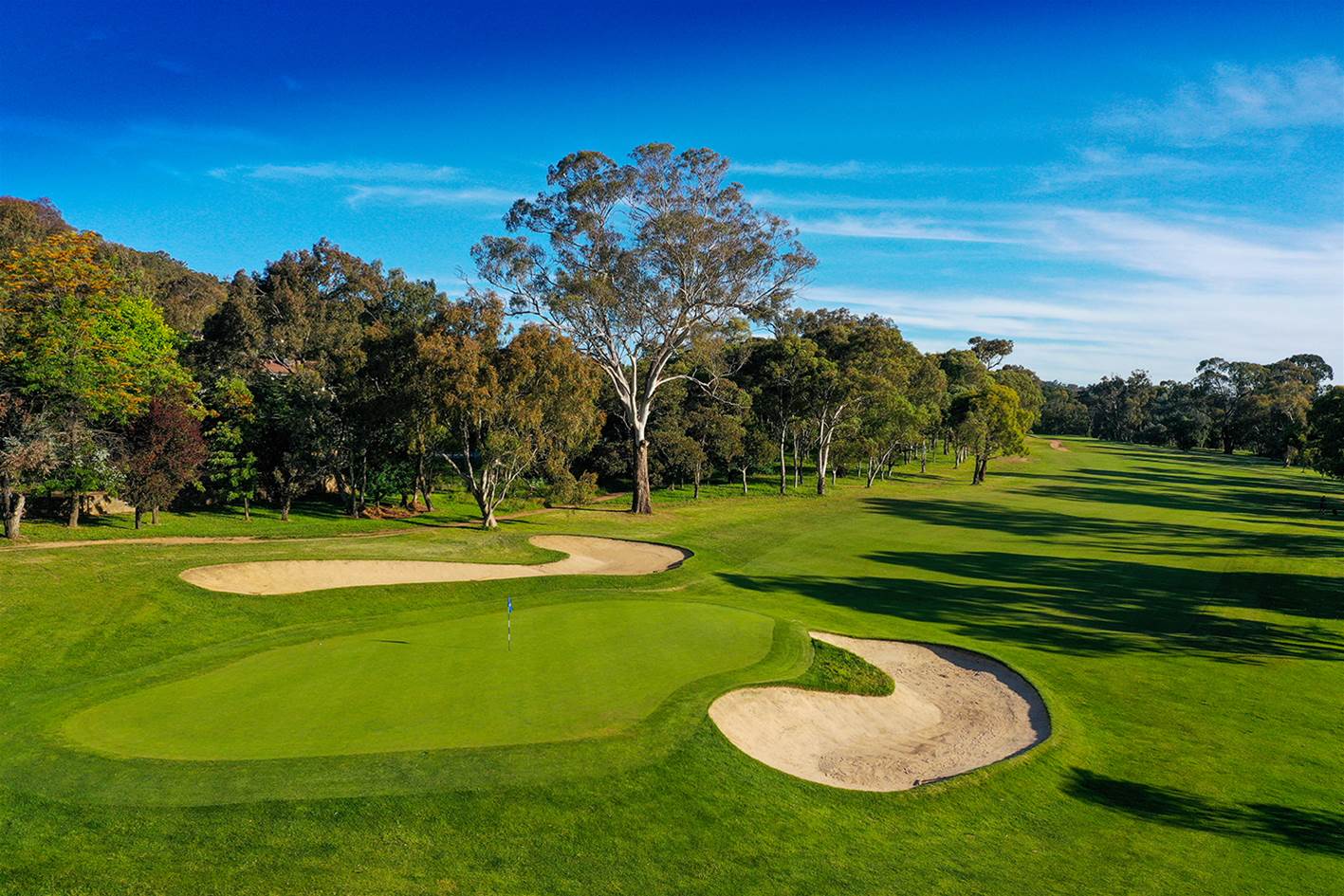 Fellow judge Hamish Walker added: “The bushland surrounds and views to the Brindabella Ranges give you the feeling you are a long way from the city. There is a lot to like about the routing here, which stretches to all points of the compass across the rolling terrain.”

Federal is secreted away on the edge of the Red Hill Nature Reserve and across the foothills of the lookout of the same name. Mature native gums, banksias and dozens of other floral varieties line the fairways and provide the feel of being in the middle of nowhere. Truth is, this course is in the middle of Canberra’s established inner southern suburbs and the backdoor to Parliament House is less than two kilometres away.

The par-72 covers a gently sloped site with the clubhouse occupying the highest point, with several holes also being elevated on slightly smaller hills within the property. All offer great views of the Brindabella Range off in the distance.

Formed in 1933, the club didn’t move to its current site until 1949. That was more than a decade after former Australian Open champion and acclaimed course designer Alex Russell (Royal Melbourne East and Lake Karrinyup) had recommended the Red Hill site to the Royal Canberra club, which was looking for a new home following the flooding of the Molonglo River to create Lake Burley Griffin. When Red Hill was dismissed by Royal Canberra in favour of its current location at Yarralumla, Federal’s committee secured the site because its first nine-hole sand scrape course had suffered the same fate as the original Royal. 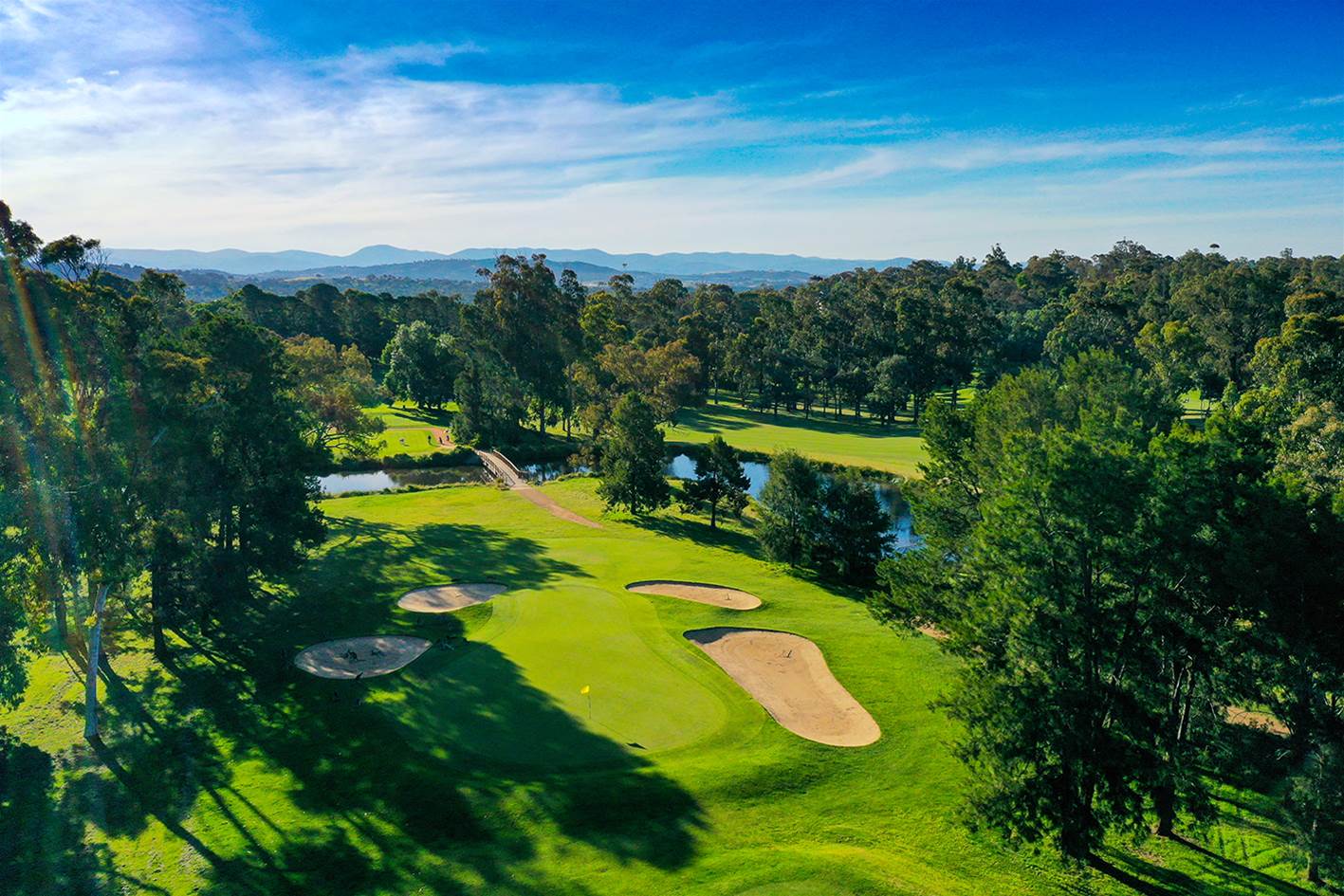 The smallish 8th green and four bunkers add some teeth to the par-3. PHOTO: Brendan James.

Upon arrival at Red Hill in 1950, the club had nine holes opened for play designed by Scottish pro James Herd Scott, who had earlier created Sydney’s Monash CC and the back nine at neighbouring Elanora.

Additional holes were added by the enthusiastic membership over the ensuing years, but all this work was completely redone in 1967 as part of a redesign masterplan by Prosper Ellis – widely acclaimed at the time for creating the links at Belmont, near Newcastle, and his work at Bonnie Doon. His creation at Federal was well received and has remained largely unchanged for five decades and is the finest design work of Ellis’ career.

The most significant change the club has made in recent times has been securing its water resources. Several irrigation dams were constructed, while all its fairways were converted to the hardier and less thirsty Santa Ana couch grass. Easier access to water and the need for less, has seen the level of presentation reach a consistently high standard year-round, which is certainly what you would expect from a layout that is ranked in Australia’s Top-100 Courses and reached an all-time high No.45 in Golf Australia’s Top-100 Public Access Courses in 2021. 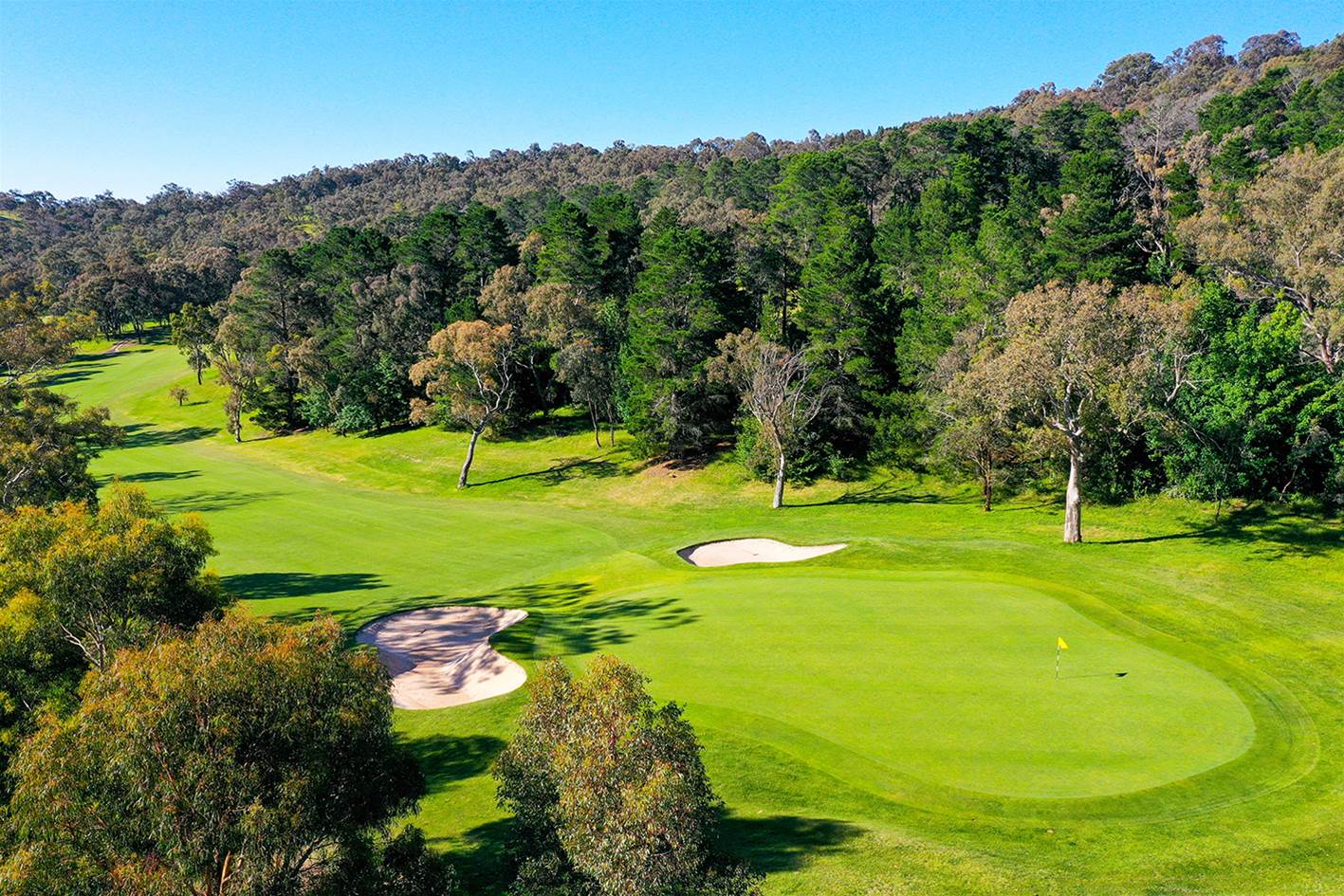 Be wary of the false green front on the par-4 14th hole. PHOTO: Brendan James.

These accolades have certainly added to the pride Federal members have for their club, which has played host to national tournaments and is the annual host of the Federal Amateur Open Championship – a world amateur golf ranking event that always attracts a high-quality field. A club cannot host high calibre events like these without a superior quality course – in both the challenge it presents and the experience it offers.

The terrain at Federal lays the foundations for some visually impressive holes that make a round here memorable, while the design asks questions of your ability throughout.

The opening hole – a 505-metre par-5 from the back markers – does more than lead you downhill and away from the clubhouse. It really sets the scene for what is to come. The slight dogleg left fairway slopes down gradually from the tee to the top of a hill, marked by a deep bunker on the left edge of the fairway. Long hitters can really shorten up the hole by clearing the crest and getting a favourable kick down the hill. The fairway runs through a valley before rising slightly up to the green that is protected by three bunkers. 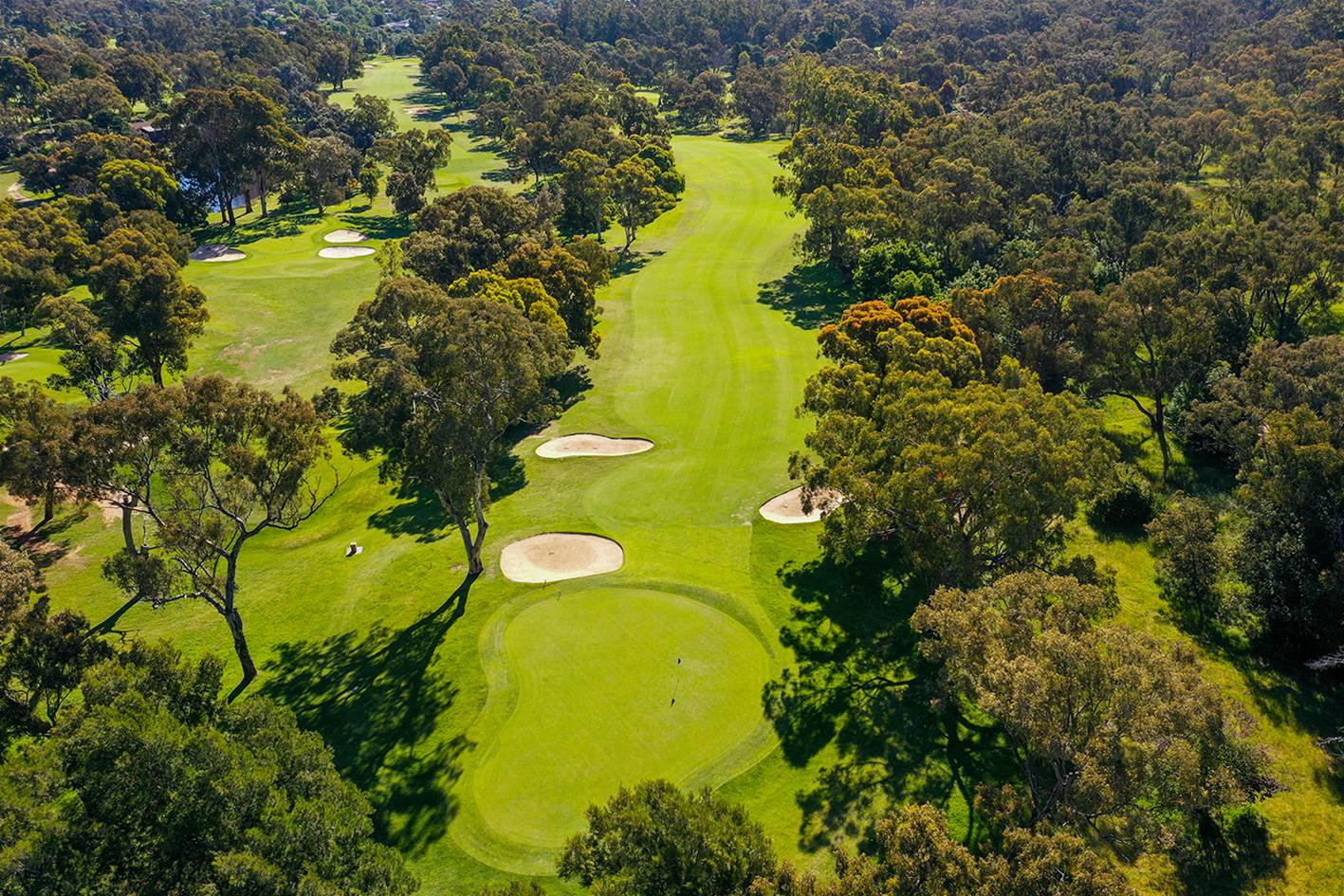 The tight journey of the par-5 13th hole starts a great run of holes back to the clubhouse. PHOTO: Brendan James.

Federal’s best par-5, for mine, comes on the back nine. The 463-metre 13th hole plays significantly longer than its number might suggest on the scorecard. From the tee, the dogleg right fairway dips downs into a valley before hitting another downslope and then gradually climbing towards the green. Bunkers left and right of the final uphill approach into the green, complicate the decision to be made by longer hitters thinking of getting their second shot onto the green. A much deeper bunker lies short and right of the putting surface, which also features a false front making it difficult to hit shots close when the flag is in the front third of the green.

The 13th hole, for mine, starts a wonderful run of holes back to the clubhouse. The back-to-back par-4s at the 14th and 15th, dogleg left and right respectively across the rolling slopes from the foothills are outstanding. Both require good drives to leave a clear uphill approach to both greens, which are large and protected by sand and nicely trimmed side slopes.

One of the highlights of a round at Federal is the quality of its four one-shot holes.

All of the par-3s are of varying distances, while the green complexes of each differ in terms of shape and the demands placed on the type of shot you need to play to get your tee shot close to the hole. 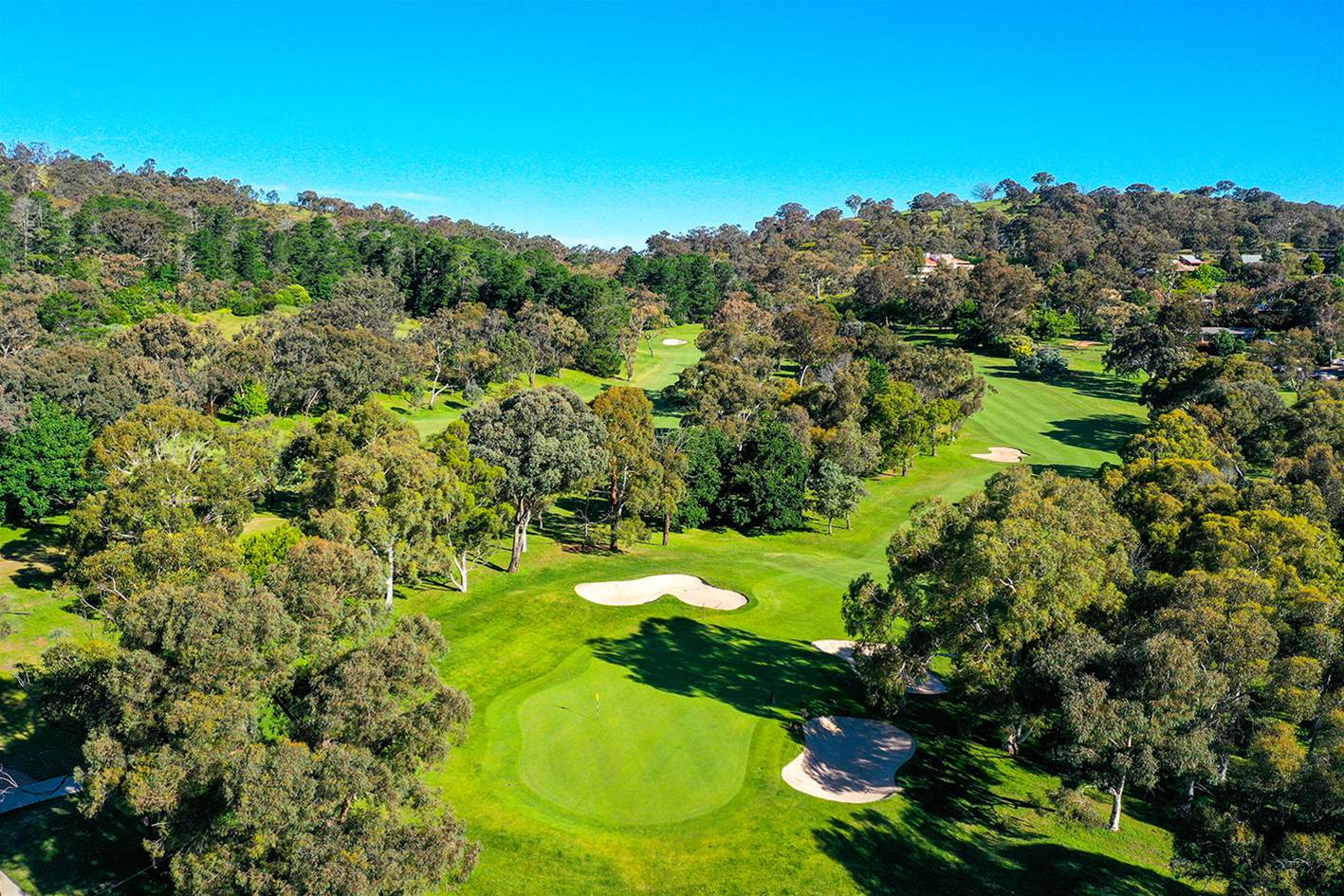 The uphill shot into the par-4 15th is a good test of your club selection. PHOTO: Brendan James.

The shortest of Federal’s par-3s is a gem and has been previously been voted one of Australia’s best one-shotters. The 135-metre 16th hole plays slightly downhill to a smallish green wedged into a space flanked by four large bunkers – three to the right and one left. A good miss here is into one of these bunkers as an over-clubbed shot will run down a steep greenside slope into the rough or trees making it extremely difficult to save par. Perhaps the most memorable aspect of this little wonder is the view off to the Brindabella Range in the distance.

It is testament to the quality of Ellis’ now 55-year-old design– complimented by thriving high-quality playing surfaces – that, today, Federal is deservedly rising through the ranks as one of this country’s best courses.

MEMBERSHIPS: There is a wide range of membership options available. The Classic Membership is the premier category designed for golfers who are passionate about playing and practicing multiple times a week. Classic Members enjoy a range of benefits designed to enhance the overall experience and includes seven day playing rights, all comp and usage fees for daily events, visitor vouchers and buckets of range balls. For more details of all categories visit the website.

CORPORATE GOLF: Mondays and Thursdays are available for organisations to book the course and from the outset an experienced team is on hand to design an event to meet your requirements.