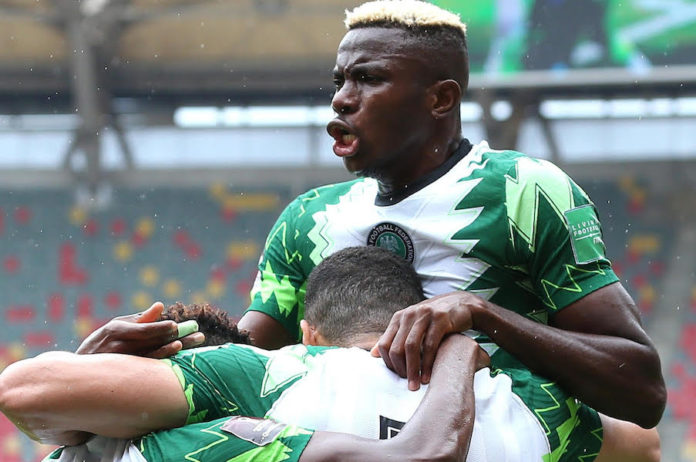 Super Eagles have redeemed their image in the ongoing 2023 Africa Cup of Nations qualifiers with a 10-0 mauling of hapless Sao Tome & Principe in Agadir, Morocco.

The victory has moved Eagles to the top of Group A on six points. Guinea Bissau who were held 2-2 by Sierra Leone in the other game  yesterday are second on four points. The Leone Stars are third on one point with São Tomé who are yet to get any point fourth.

Napoli forward, Victor Osimhen, scored four out of the 10 goals to equal Rashidi Yekini’s feat in the 7-1 defeat of Burkina Faso in 1991.

It also erased the  10-1 recorded by the then Green Eagles secured against the then Dahomey (now Republic of Benin) in 1959 in Kwame Nkruma Cup.

After a not too convincing win over the Leone Stars in Abuja last Thursday, Super Eagles promised to redeem their image with minnow São Tomé & Principe with plenty goals.

True to their promise, Osimhen kicked off the goals rush barely 10 minutes into the game played on a lush green turf far better than the Abuja stadium. The Napoli front man connected home with a header a cross from Moses Simon from the left. Simon was Captain of the day in the absence of Ahmed Musa and William Troost-Ekong on pitch in that first half.

Osimhen and Simon were again involved in Nigeria’s second goal on 28 minutes with Moses Simon now the scorer and Osimhen the provider.

With clock ticking to half time break, Terem Moffi, scored his first Super Eagles goal when he eliminated his marker inside the box before he fired past Eba Viegas in goal post for  São Tomé.

Osimhen headed home his second goal of the day three minutes on return from the break in in the 48th minute thanks to a cross from the right by Ademola Lookman.

In the 55th minute, Oghenekaro Etebo made it 5-0 for the Eagles when he curled a free kick from the edge of the box.

On the hour, Moffi got his brace when he slotted home a low cross from inside the box by Zaidu Sanusi.

Four minutes later, Lookman made it 7-0 when he fired home after Moffi had been thwarted by the Sao Tome goalkeeper.

Osimhen completed his hat-trick a minute later he got to the end of a through ball before he stabbed beyond the opposing shot stopper.

He then netted his fourth goal in the 84th minute in a repeat move.

The Napoli striker has now scored 15 goals for Nigeria.

He later struck the post in the closing moments of the encounter.

Substitute Emmanuel Dennis wrapped up the routing in stoppage time when he scored from the penalty spot after he had been brought down inside the box.