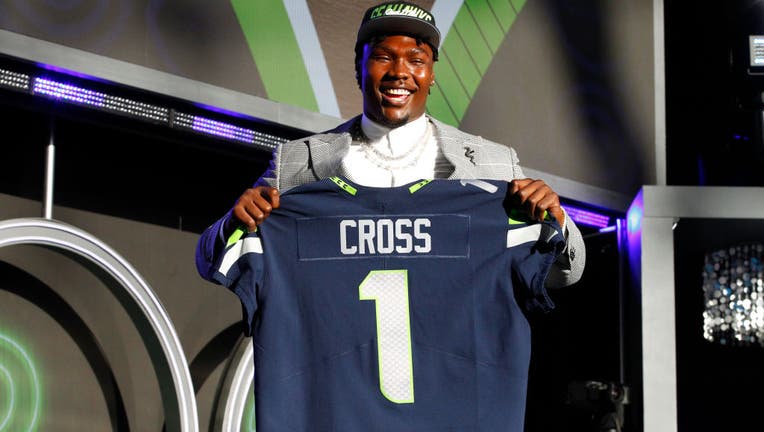 RENTON, Wash. – The Seattle Seahawks completed their 2022 NFL Draft class by making nine selections over the three days of the draft this past weekend.

It was the first time in 12 years that the Seahawks made a pick inside the top 10 of the draft. They also made four picks in the first 72 picks of the draft, including back-to-back picks in the second round at picks Nos. 40 and 41.

Here’s a recap of some of the most significant takeaways from the Seahawks draft class:

– Meat and potatoes draft for Seahawks.

The Seahawks didn’t get cute with their draft class. Instead, they hammered their areas of need with a keen focus on the offensive and defensive lines.

Offensive tackles Charles Cross from Mississippi State and Abraham Lucas from Washington State addressed clear positional shortfalls with Duane Brown and Brandon Shell both unsigned. Minnesota’s Boye Mafe is an athletic pass rusher with upside and Tyreke Smith is a three-year starter at Ohio State that adds depth to the pass rush group.

Kenneth Walker II adds to a running back group that has injury concerns. Cornerbacks Coby Bryant and Tariq Woolen add to the secondary with a proven college performer (Bryant) and a phenomenally athletically gifted project (Woolen).

“I feel like we balanced it out,” head coach Pete Carroll said. “We’ve attacked some needs. And the tackle spots really, that was a big deal and we, really fortunate that that worked out like that, really fortunate. We got two really good guys to go for it, to upgrade the challenge and the competition at those spots. I don’t know who is going to start, but I know those guys, they’re going to be challenged by the new guys coming in, which is great. It feels like, as I was saying to John, we had some spots and we didn’t just get a guy. We got a couple guys that can help us, we think. If we can continue to push to make it competitive, it makes us better and that’s what I think we feel coming out of there. We got that done.”

Carroll also noted that two tackles and a running back being selected early speaks to their commitment to get the running game back rolling.

“Three of the four picks (being offensive line and running back) really makes a statement about the emphasis of what we’d like to get done and we want to shore things up on the edge,” Carroll said. “With Kenneth (Walker II) coming in, Kenneth is an explosive, exciting running back to add to what we got. You know, it just rings true. We want to run football. We want to be good at it and want to compliment our whole football team with the way we approach it and this was an opportunity to do it and it just felt right.”

However, the Seahawks clearly didn’t believe in any quarterback available in the 2022 NFL Draft class.

“The head coach and the quarterback are the two most important people in the building. It has to be right,” Schneider said Friday night. “Everybody has to have a comfort level and everybody has different strengths and different weaknesses, deficiencies. The staff’s have to be confident that they can help those players out with their deficiencies.

Cincinnati’s Desmond Ridder went 74th overall to the Atlanta Falcons. Liberty’s Malik Willis went 86th to the Tennessee Titans. Mississippi’s Matt Corral went 96th to the Carolina Panthers.  With the 40th, 41st and 72nd picks, any of those three could have been Seahawks if the team believed in them as prospects. Their lack of action speaks to their lack of belief in this year’s quarterback crop.

Instead, the Seahawks have two first round picks and two second round picks next year in a draft that is thought to be much stronger on the quarterback front. With that ammunition, the Seahawks can chase any of the top quarterbacks in the class. Alabama’s Bryce Young, Ohio State’s C.J. Stroud, Kentucky’s Will Levis, Miami (FL)’s Tyler Van Dyke, South Carolina’s Spencer Rattler, and Stanford’s Tanner McKee are among a strong group of players that could be first round selections next spring.

The Seahawks are reportedly signing Louisiana-Lafayette quarterback Levi Lewis as an undrafted free agent. But outside of that addition, the Seahawks appear set to go forward with what they’ve already got.

“The competition is underway,” Carroll said. “Geno has come in and is obviously ahead going in because he’s had all the background with us. He’s been with us for a number of years. He leads the charge right now. He’s in command of our system as much as a guy could be. Jake had a year with us so he’s doing his part. Meanwhile we’re watching how Drew comes along and he’s going. He’s busting his tail to catch up and be right with it. All of our guys we know are strong-armed throwers. We will not lack in the potential of our throwing game, the style and the things that we can do. We’ve been able to see Drew in great depth. We’ve seen everything. We went all the way back to all his college days and everything else. Every throw he’s ever thrown to show us what he’s capable of doing. We’re fitting it together.

“I know that in the meeting room, our guys are sharp and they’re precise and they know it’s on. Nobody is just going through the motions here. It’s a crucial [competition] and they’re taking to it and it’s serious. It’s great to see.

With the selection of Michigan State running back Kenneth Walker II in the second round of the NFL Draft, the questions surrounding the future of Chris Carson became that much more clear.

Carson has been recovering from neck surgery after appearing in just four games for the team last year.

“We took as much time as we could to rest him and then built him up to bring him back and when he came back to practice the first day it wasn’t quite right,” Carroll said in November. “He practiced again the next day and it just didn’t relent. It’s been really uncomfortable for him. It’s been physically uncomfortable for him. The indications were really strong that we needed to do something.”

After selecting Walker on Friday, Carroll was asked if that speaks to the uncertainty over Carson’s health.

“We picked him because on the board he was up there for us in a spot we just couldn’t pass him up,” Carroll said of Walker. “But we don’t have updates yet on Chris. And we won’t know for some time here and we can’t predict yet. So there’s a little bit of uncertainty that we’re waiting on. So with the commitment that we have for the run game, we want that group of guys really raring up to get this thing hitting off from the get go and so it felt like a good move.”

Walker is the reigning Doak Walker Award winner as the best running back in college football. After transferring to Michigan State from Wake Forest, Walker exploded with 1,636 yards and 18 touchdowns during his season with the Spartans.

Some will quibble with taking a running back as early as Seattle selected Walker. However, with Carson’s health in question and neither Carson or Rashaad Penny under contract beyond the 2022 season, adding at running back was an area of need for the team.

Get breaking news alerts in the FREE FOX 13 Seattle app. Download for Apple iOS or Android. And sign up for BREAKING NEWS emails delivered straight to your inbox.