BUZZ has been building around Hustle, which is, as of posting, the number two piece of content in Netflix PH right now. (Number one? The new Venom movie.)

Starring Adam Sandler as a washed-up NBA agent and Utah forward Juancho Hernangomez as the NBA hopeful he takes under his wing, the movie is a feel-good dose of sports entertainment that goes hand-in-hand with the ongoing finals series between the Celtics and the Warriors. Currently sitting at 92 percent (from both critics and audiences) in review aggregator site Rotten Tomatoes, Hustle is clearly the movie many people need right now.

Noted basketball fan Adam Sandler has been known to let his love for the sport shine onscreen — most notably in 2019’s Uncut Gems, where a meeting with Kevin Garnett (playing himself) plays a pivotal plot point. But Hustle is where the hoops fanboy in Adam Sandler really goes all out.

With LeBron James on the producer seat, the Hustle team was able to get actual NBA players to play starring roles in the film. Juancho Hernangomez, of course, ably plays rising star Bo Cruz, but Minnesota guard Anthony Edwards also plays the obnoxious rival to Hernangomez’s character. Meanwhile, Boban Marjanovic stars as “The Serbian” in a chuckle-worthy scene. 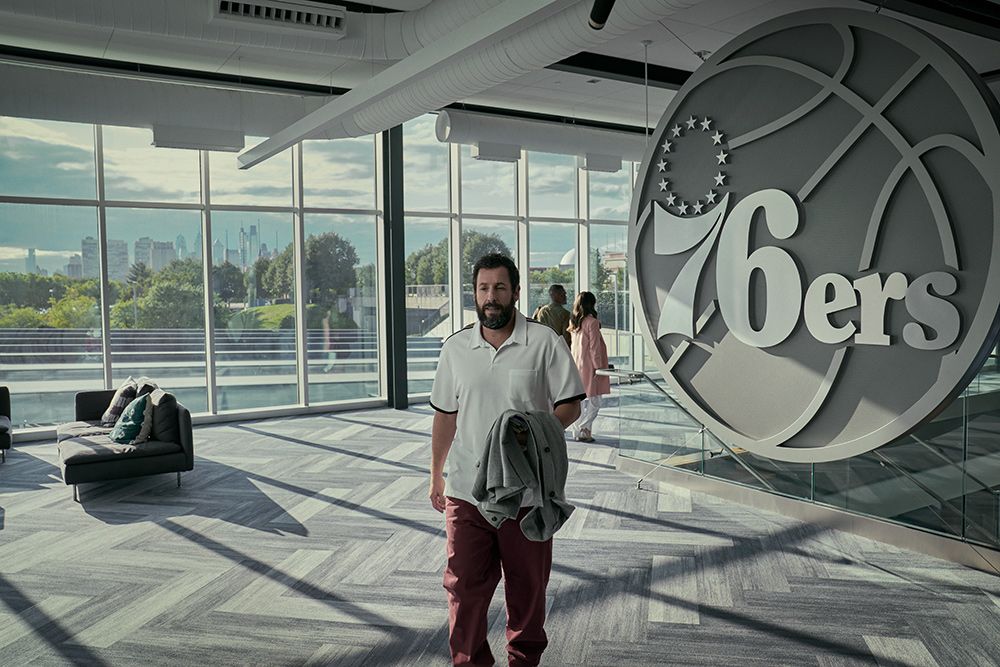 Hustle is a masterclass of Adam Sandler acting

While Sandler is rightly celebrated for his mid-90s run of goofy comedies — Billy Madison will forever be a stone-cold classic — he’s also long been stretching his acting chops in other genres. Whether he’s playing unhinged in Uncut Gems or poignant in The Meyerowitz Stories (New and Selected), the dude’s definitely got range.

In Hustle, Sandler plays the washed-out Stanley Sugarman with a forlorn, sad-sack energy, with his trademark zaniness leaking just through the cracks. (“He’s like if Scottie Pippen and a wolf had a baby!” he says of Hernangomez’s Bo Cruz.) But it’s the actor’s real-life love for the game that sells the role, whether he’s sharing screen time with actual NBA players, or mentoring Cruz with an optimistic aura that feels genuine and straight from the heart.

Is there any wonder that the movie takes place in Philadelphia? The greatest sports movie of all time, Rocky, was a Philly movie through and through, and it feels right that a movie that imbibes so much of its spirit is also set there. The sport may be different, and the training montages don’t have Adam Sandler punching meat, but the same underdog energy powers Hustle as much as it does Sly’s tour-de-force.

And frankly, a feel-good sports movie — of two oddballs and losers overcoming the odds — is exactly the sort of movie we need right now.

We are now on Quento!
to enjoy more articles and videos from SPIN.ph and other Summit Media websites.